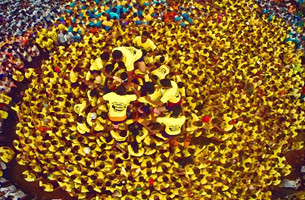 Popular in the state of Maharashtra, India, Dahi Handi is a ritual that takes place during the annual celebration of the festival of Gokulashtami. The festival celebrates the birth of the Hindu God, Krishna, and is known as Krishna Janmashtami throughout the rest of the country.

Dahi Handi in Maharashtra involves making a human pyramid in order to reach and break an earthen pot filled with buttermilk, which is tied at a height.

The idea of the human pyramid is based on a legend of the child god Krishna and his friends, who used to form pyramids to break pots of butter, which were hung from the ceilings of neighborhood houses.

Production company Mandala Motion Pictures shot this compelling film to document the event as part of its ‘An Indian Voice’ initiative. ‘An Indian Voice’ allows Mandala to shoot passion projects in and around commercial work. ‘Dahi Handi’ was directed by Rohan Talwalkar.