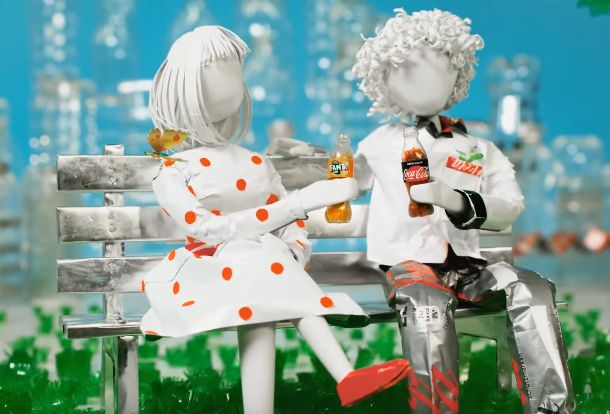 Coca-Cola Great Britain has created its first ever ad made entirely out of its 100% recyclable packaging.  Love Story, created by Ogilvy and Mather Berlin, tells the story of two bottles who fall in love as they meet over and over again after being disposed of properly and recycled into new bottles. The ad aims to encourage more people to recycle and highlights how plastic bottles can be reused to produce more plastic bottles.

The ad has recycling at its heart as the entire set was made entirely out of recyclable material – mainly Coca-Cola packaging. It was created by Cris Wiegandt & Lacy Barry who used more than 1,500 Coca-Cola, Fanta, Sprite, Smartwater and Honest bottles and cans during production.

The ad premiered on Channel 4 on July 28th and will continue on cinema, digital and social media throughout the summer. The campaign will communicate its message about recycling to 35 million Britons by the end of this year.

The new ad is part of Coca-Cola Great Britain’s new sustainable packaging strategy, which sees the company aim to recover all its packaging, as well as setting the ambition to increase recycled PET in bottles from 25 per cent to 50 per cent by 2020. It’s the company’s biggest ever, recycling-focused consumer communications campaign and will include experiential activities at music festivals and events, at which Coca-Cola will promote recycling messaging to another six million people.

Aedamar Howlett, Marketing Director for Coca-Cola Great Britain says: “The beauty of Love Story is that it reminds people our packaging is valuable, as it can be recycled into more packaging over and over again. All of our packaging is 100% recyclable and has been for some time now. The multi-million pound campaign shows how serious we are about encouraging more people to recycle, so we that we reach our aim of getting all of our bottles back.”