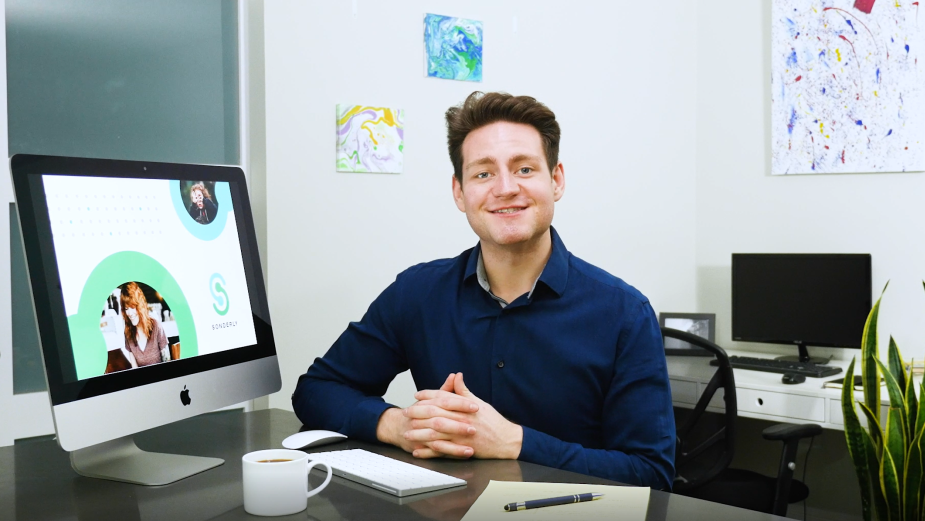 Canadian agency LP/AD were all set for what would have been a relatively simple shoot for Sonderly, the e-learning platform for the Geneva Centre for Autism. But, like so many shoots around the world, it was sent into disarray due to the social distancing measures in place to try and stop the spread of Covid-19. But whereas many brands have leant into self-shot commercials, filmed with the front cameras of people's phones, this particular production took a more surprising turn.

Matt Hoffman, a digital planner at LP/AD, sent a message to an actor that the agency has previously worked with to see if he'd be up for starring in the project. It turned out that he was, but also that his roommate was a director with a decent production setup at home. Soon they were location scouting around their house, raiding their actual wardrobes for wardrobe, and had enlisted a third housemate as gaffer.

Addison Capper spoke with Matt to find out more.

LBB> Most WFH shoots I’ve seen so far are self-shot on mobiles. This is a little different! What are its foundations? When did you realise that this was a possibility?

Matt> It all came together quite serendipitously. The plan had been to do a self-shoot with our actor. But as luck would have it, his roommate happened to be a director, who offered to get involved, since they were stuck together in their apartment anyways. Coordinating everything virtually through video chats, we were able to test different furniture setups in different locations (living room vs kitchen), and picked the wardrobe straight from the actor’s actual wardrobe. Having a director there proved to be essential in transforming the set, since he lived in it and quickly envisioned its potential. He also handled all the technical filming aspects, and having his eyes on set helped ensure we got all the right shots.

LBB> Thinking of other examples of self shot ads, what are your thoughts about this ‘moment’?

Matt> I think we should be aware that advertising tends to be a reflection of current events. As we go further into the lockdown, we’re not going to be seeing ads with people at crowded concerts or in busy offices. We’re going to be seeing ads in the context of WFH, physical distancing or alone time. At least for some period of time. So perhaps this moment and this approach towards production is perfect in order to be a mirror for what’s top of mind and today’s realities.

LBB> What were your initial plans for this campaign and when did you begin thinking that you might need to come up with a plan B?

Matt> Even pre-pandemic, the concept for the videos was fairly simple in nature, and mostly relied on the energy of the actor. We hadn’t selected talent yet and originally intended to use a different actor for each video. We assumed that we’d be able to film in an actual office or professional-looking setting, instead of having to create such a setting from scratch. Having suddenly been thrown into the new work from home reality, we were forced to adapt to the situation and figure out a way to make it work - a modus operandi our shop thrives on. It was either that or postpone the shoot indefinitely, like everyone else is doing. Because of the hit the production industry has taken, and everyone now being available, it only took one phone call to secure our talent and location, and the rest came together a lot quicker than plan A would have.

LBB> The director / DOP - what was their reaction when you first pitched him this idea?

Matt> Angst is at an all-time high within the production industry, as work is usually project-based and all projects have been halted. Having been directly affected by this, our freshly stumbled-upon director was un-phased by the unorthodoxy of our task. He was up for the challenge, eager to participate not only because it meant a paying gig, but also because it was an opportunity to break the boredom of quarantine. It gave him a project to focus on, and after a quick briefing, he was totally on board with our vision, and confident that he could make everything look great with what he had to work with. We were e-shooting the next day.

LBB> Talk us through the crew and how you got each of the roommates involved!

Matt> It started with Dewey, an actor we worked with on a shoot for another client a few months prior. His high-energy personality fit the vibe we needed for the videos, so I took a chance and sent him a message on Instagram asking if he’d be interested in this project. He responded immediately with a yes and mentioned that his roommate, Peter, was a director, equipped with production gear at home, as well as post production capabilities (a huge bonus!). Suddenly, we had a crew and we all met virtually a few hours later. On shoot day, we were virtually plugged into the set and discovered that the crew now included a third roommate serving as gaffer. And he actually seemed happy just to be involved in something that extended beyond their apartment, even if that still meant not leaving it.

LBB> How did you find the creative direction via video call process?

Matt> Overall the process was surprisingly smooth, although it was a little tedious having to make adjustments to the set that could have been sorted out easier by being there. Being unable to see through the camera’s lens required sending stills back and forth with direction in order to get the exact frame and look we wanted. Through our video chat, we were able to try different takes with the actor, providing feedback just as if we were in the room.

LBB> As lockdown potentially might continue for months, crowdsourcing home-shot footage might continue to be a really great avenue … how do you think it will evolve and what will be the key to keeping it creatively fresh and interesting?

Matt> A lot of people are experimenting with ways to keep work going right now. A month ago, shooting virtually from someone’s home would have seemed a bit crazy. This whole situation is now forcing creatives to rethink the way they create. Technologies like Zoom are enabling collaboration with people whose paths would never cross if not for quarantine. I think we’ll become less attached to how things should be done and more focused on how things could be done. This is in essence what it means to be creative. What can you make with what you have? The answer is actually a lot more than you think.