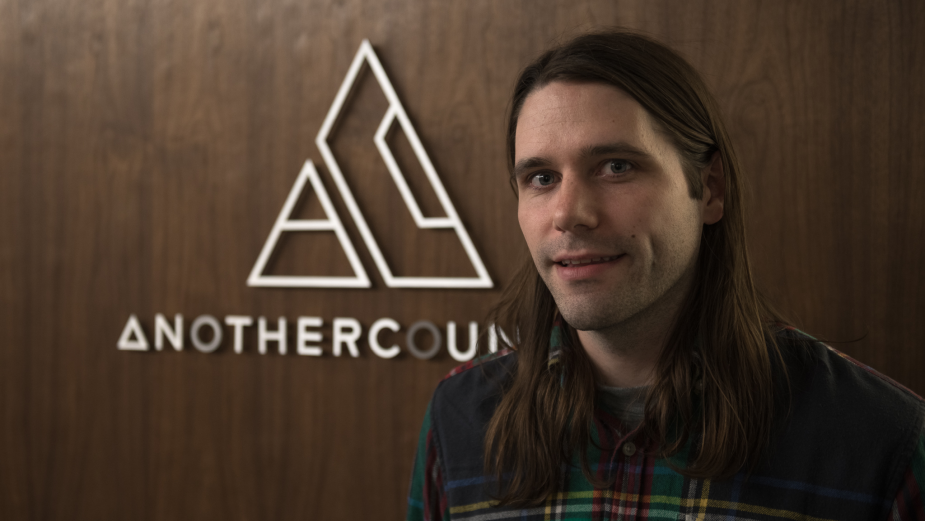 Jordan Stalling joined Another Country in May, 2019, as sound designer/mix engineer. He spent the previous six years with Comma Music, where he began as an assistant engineer and rose to the sound designer mixer position in 2018.

Winner of "The Lev" International Grand Prize in Sound Design in the Camp Kuleshov competition in both 2016 and 2017, Stalling has distinguished himself professionally through his considerable talents in audio engineering and music composition. His credits include work for Porsche, NHL, Coors, and Guaranteed Rate.

Jordan> It definitely varies from project to project, but when it’s called for, I try to nail down what the piece is hoping to achieve. Then I think about what the role of sound should be in reaching that goal.

Jordan> I think collaboration is often essential to keeping creative projects interesting. It’s not only a way to learn from the different skill sets of others, but a chance to find out what is and isn’t working collectively, ultimately hearing that in the end result.

I recently had an opportunity with the folks at Digitas to create a spatial listening experience for Ascend, the largest Pan-Asian business professional membership organisation in North America. The project, called Sound of the Other Side, was created to draw attention to the discrimination and stereotypes Asians and Pacific Islanders are subjected to in professional settings on a daily basis. We showcased member interviews and created sonic environments to immerse the listener into each storyteller’s experience. It was super rewarding to work with the team to help shine a light on such a prevalent issue.

Jordan> I remind myself how fortunate I am to do this every day and that’s a continuous source of fulfillment. I have the opportunity to work alongside and learn from a lot of creative minds, which makes for an exciting and engaging day-to-day.

Jordan> I think the increasing amount of content people consume allows more opportunities for music and sound to be a driving force. It’s exciting to see newer avenues like TikTok emerge where people are almost exclusively using the app with the sound on, versus rushing for the mute button.

Jordan> Skip Lievsay, who works on all of the Coen Brothers’ films, has always been my favourite in the sound world. He adds so much to everything he works on and can make the seemingly simplest of sounds steal the show. For music, I’m in awe of pretty much everything Blake Mills does as an artist and engineer.

Jordan> This falls more under the ideas portion of the question, but when I was young and would complain while being dragged along grocery shopping or to the mall, my Mom would ask “What are we practicing?”, the correct response being “Patience”.

I try to keep that in mind when struggling to get a mix sounding right, or working on more tedious aspects of the job. Thanks, Mom.

Jordan> I definitely prefer silence when answering emails or reading - music steals my focus too easily. I also annoyingly finger tap/drum to music, so it’s only a matter of time before I’m working out hi-hat patterns on the desk instead of processing the words in front of me.

Jordan> QC’ing mixes on a variety of speakers is as important as it’s ever been. I put trust in my ears and listening environments and just try to be proud of each mix that goes out the door.

Jordan> I have a pretty (un?)healthy listening diet of comedy podcasts that are usually playing while I’m getting ready for the day. I’ll typically switch to music when cooking dinner.

LBB> Do you have a collection of music/sounds and what shape does it take?

Jordan> Being home so much over the past few years has definitely led to more vinyl listening, so my collection has grown quite a bit. I like picking out a stack of albums and making a soundtrack for a relaxing weekend morning or just cleaning up around the apartment.

Jordan> Running is a big hobby of mine, and I’ve become a fan of leaving my headphones at home. I run along an elevated trail called The 606 in Chicago, and love taking in the city soundscape given how unique that can be to each day. It’s also a nice, quiet contrast for my ears before working with audio all day.

Jordan> My fiancée and I were able to take a trip to Ireland earlier this year. We stayed above a pub in Dublin for a few nights and unsurprisingly found ourselves having drinks there often. One afternoon, a few tables of family and friends were toasting to a regular who had passed. One of the men began singing an Irish Folk tune, and many soon joined in. Ireland was fresh out of a lengthy lockdown, and you could tell it meant a lot for this group to be together, even if it wasn’t for the most joyous of occasions. It was a special reminder of how powerful music can be, and the different ways it brings us together. A lot of emotions at once.

Jordan> Growing up playing music, or later when first getting interested in post-production audio, I would seek out the most extreme expressions of each craft. Whether it was impossible to follow Math-Rock or the most explosive and intense sound design, I was all ears (sorry). As I’ve gotten older I’m more impressed by work that conveys those intricacies by saying more with less.