Think You Can Outrun a Tiger? Give It a Try with Hungry Boys' WWF Site 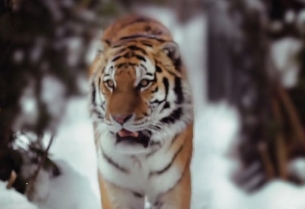 You’ve run in marathons and enjoy keeping fit, you may have even held a record at some point in your life, but have you ever competed against a wild animal?

Well, now you can…

The World Wide Fund for Nature has teamed up with creative agency, Hungry Boys, to produce a website that lets you race against an Amur tiger in its natural habitat.

By accessing the Run 4 Tiger ‘Tiger Challenge’ and connecting it to their chosen running app, participants can go head to head in a time trial with an animal fitted with a GPS tracker.  The tiger runs an average of 20km a day.

Entrants can monitor their performance against the big cat and other contestants by following the hashtag #Run4Tiger on Twitter.

The project has been created to raise awareness of the precarious situation the Amur tiger faces.  There are only 450 of them in existence in the wild today.

Vlad Sitnikov, creative director, Hungry Boys, says:  “This is the first time in the world you can compete fairly with a truly professional runner, the Amur tiger, and benchmark yourself against the best. But, if you lose, you need to donate $5 to the WWF save the tiger campaign.  Sound like fun?  We think so."

Yury Sochnev, Head of Marketing, WWF Russia, adds:  “The decline in the wild tiger population is a global issue.  This is a positive and creative way to raise awareness of their plight.  It’s a win-win situation.  You get to race against this magnificent animal whilst simultaneously generating money to help protect it.  It’s time to run for your life.  Our tiger is waiting for you."