Things Come Together in Super Slow-mo in New Squarespace Spots 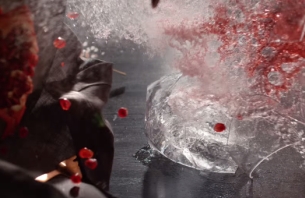 Continuing its partnership with SpecialGuest, Squarespace tasked the team with shooting a series of stunning spots featuring real customers’ businesses in unmatched definition and clarity. The result is the poetically-charged “Build it Beautiful” campaign, a trio of kinetic 30 second ads that serve as a powerful follow up to the partnership’s recent successful launch of Squarespace 7.

The three spots showcase the authentic beauty of various ensembles of objects in motion, falling from chaos into perfect arrangement, ultimately landing as beautiful still images on Squarespace pages. Using the cutting edge Phantom Flex4K and masterfully lit sets, Director Tim Brown and Partner/ECD Aaron Duffy were able to shoot 1,000FPS footage so crisp that at first glance, the slow motion spots, made entirely with practical effects, look like clever CG. The result is a series of vivid, high-definition masterpieces, each appearing as a living still life.

In a unique collaboration with real Squarespace users, each spot features a different cast of objects selected to represent the real businesses’ sites. The carefully selected customers worked closely with SpecialGuest and the team at Squarespace to showcase how the platform allowed them to create the state-of-the-art online identities they envisioned for their companies. By designing the campaign around the aesthetic purity of motion, SpecialGuest enabled Squarespace to showcase a variety of industries by selecting different sets of objects.

“The campaign is a truly collaborative effort, working with these businesses to properly convey the passion and energy behind the Squarespace community,” explains Duffy. “That’s part of what makes Squarespace great, both as a creative partner and as a platform: ultimately Squarespace is about more than just building websites. It’s also about helping to support and empower its community.”

This campaign for Squarespace follows a series of visually dynamic projects from SpecialGuest, including a new experiential program for Qualcomm, a romantic piece for Facebook, and an energetic stop-motion spot for Frooti’s rebrand.