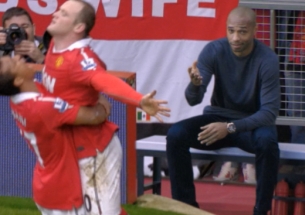 Sky Sports takes fans back though Premier League history using archive footage from 23 years, in a spectacular new film.   Global football icon and Sky Sports expert , Thierry Henry is asked “…Is this the best League in the world….?” he decides to find out, and suddenly leaps through time into the ‘greatest moments’ of  The Premier League, and relives the joy and pain of Sky’s coverage alongside the players, managers and fans of the day.

The creative idea was devised by Brothers and Sisters, and realised by Outsider and Electric Theatre Collective.

Gary Hughes, Head of Football at Sky Sports, says: “Sky Sports is synonymous with the Premier League, we have been there from the beginning and brought viewers countless unforgettable moments from the greatest league in the world. Thierry going back and celebrating a few of those special moments will only make everyone more excited for the season ahead.”

The unique film “Greatest Premier League Moments” celebrates an unprecedented historical archive as Thierry seamlessly appears in every key scene, including coming face to face with his younger self when Arsenal won the League at White Hart Lane, as he asks: “Did someone mention the Invincibles?"

Attention to detail included building a tunnel wall to extend the scene and create parts of the shot to allow Thierry to “eavesdrop” on the Manchester United Roy Keane’s argument with Arsenal captain Patrick Vieira in the tunnel bust up; and filming Thierry under the same motion camera conditions and lighting (time of day) to match up the new and old film.

Andy Fowler, founder and ECD of Brothers and Sisters adds, “It is a sports-fan’s dream to delve into Sky’s extensive catalogue of footage since 1992 of Premier League matches to make this film.  So many great stories have been told around football, but here we have the chance to illustrate why this is the best league in the world.”

The multi-media campaign which highlights the start of the Premier League season on Sky Sports, includes the TVC “Greatest Premier League Moments”, print including DOOH, and a digital campaign.  An online hub has also been produced featuring key interviews with Sky Sports pundits, including Thierry Henry, talking about their favourite key moments in Premier League.  There will be options on the hub, allowing the public to choose from 160 clips to share and vote for their own “greatest moments” from Premier League history, a leader-board of the top 10 public choices will feature on the site.