These Volvo Idents Put a Swedish Spin on Hollywood Tropes 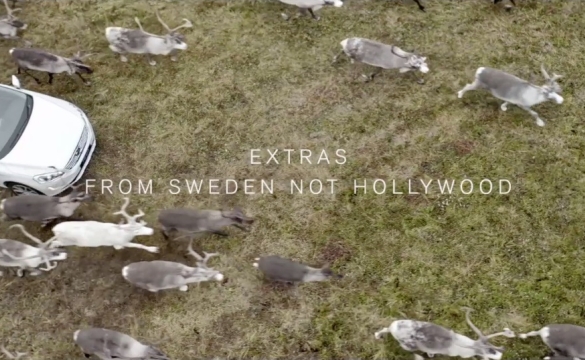 Volvo Cars UK has unveiled its latest campaign, From Sweden Not Hollywood – a series of 28 visually-striking idents for its sponsorship of Sky Atlantic. The two year partnership sees Volvo appear in Sky Atlantic for 60 seconds every hour of programming, 24 hours a day.

Created by Grey London, the idents – which will be on-air until 2016 in a deal brokered by Mindshare & Sky Media – celebrate the art of Hollywood filmmaking by playfully adding a touch of Swedishness to well-known film terminology.

Filmed in Stockholm and Kiruna, the insightful executions compare and contrast the explosive drama of Hollywood production to the no-less-dramatic natural beauty of Sweden. Beautifully shot, they reflect the pillars that underpin Volvo’s revamped brand positioning: ambition, simplicity, authenticity, Swedishness, and the same level of design quality and craft that goes into its cars.

Soundtrack, from Sweden not Hollywood: the visceral roar of a thundering hillside waterfall.

Greenscreen, from Sweden not Hollywood: a bird’s eye view of a road winding through a stunning, as-far-as-the-eye-can-see Swedish forest.

Suspense, from Sweden not Hollywood:  a Volvo’s headlights creeping their way through an eerie, foggy, dense and pitch black forest.

Kylee Rush, Brand and Launch Manager at Volvo Car UK, says: “These eye-catching idents are epic, in-line with both Sky Atlantic’s programming and Sweden’s landscape itself. The series allows us to organically showcase two Volvo cars, the XC60 and V40, within visually stunning Swedish vistas, while simultaneously talking to viewers in a very intelligent and human way. Furthermore, the programming we are sponsoring is very premium, appointment-type television, and therefore very much aimed at our target audience for Volvo.”

The creative team at Grey, Erik Uvhagen and Johan Leandersson, are both Swedes, as is the project’s planner, Wiktor Skoog, who adds: “Our aim – and we hope we’ve achieved it – was to speak in a non-intrusive, stimulating and relevant way to our target audience. There’s a natural correlation between Sky Atlantic programming and Volvo’s brand messaging, and the idents tell a story in their own right – with each pair introducing a concept before the ad break before revealing the idea at the end.”

In total, 28 different idents will roll out over the remainder of the year, while new executions featuring Volvo’s flagship all-new XC90 model will debut in 2015 to mark the model’s introduction to the UK.