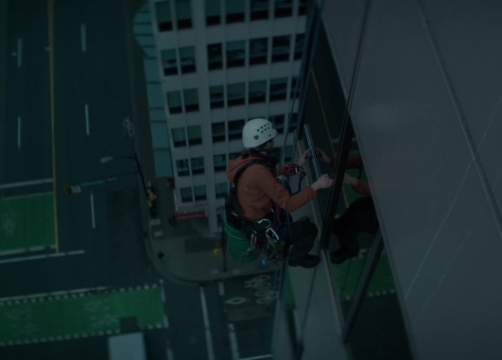 Stink directing duo Norman Bates collaborated with Projector agency and MP Creative to compose a series of simple and emotionally engaging portraits for Uniqlo’s new HeatTech clothing range. Being used as a part everyday life by people whose jobs are impacted by varying climate conditions, these are universal stories of human warmth in environments of literal and sometimes metaphorical cold:

Follow Arno’s story, a journalist whose work takes him all over the globe, from the Amazon to Alaska.

Follow Cate’s story, a high-rise window cleaner that has conquered her fear of heights and now battle the elements while dangling at the end of a rope with a long drop below.

Shot in Vancouver, the team used the diverse weather conditions and the dramatic landscapes to amplify the cinematic look they were after. Their casting of real people who thrive in these environments gives each film its authentic feel, and through human emotion, this series conveys the comfort and flexibility that HeatTech affords everyday people.