These Chilling YouTube Tutorials Shine Light on Victims of Abuse 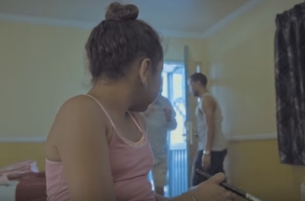 Children's rights organisation Plan International Finland has released a series of emotive, YouTube tutorial videos that highlight the shocking reality faced by girls globally, many of whom live in fear of sexual abuse, child marriage and harassment.

The films form part of 1000 Days, a campaign created by hasan & partners Helsinki, to illustrate how vital the days from conception until her second birthday are to a girl’s future safety and success.

Outi Ruuskanen, Marketing & Fundraising Manager at NGO Plan International Finland said: “If girls in developing countries are helped within their first 1000 days they face the world stronger and their chances to avoid abuse, trafficking, violence and poor education get better.”

In one video, entitled 'Sexual Abuse', a young girl applies mascara and make-up while a man, who could be her father, nervously flits around her bare bedroom. During the 90-second film, while the girl continues her tutorial, there’s a knock at the door and an elderly man is welcomed in. The atmosphere changes and the girl is led away. The scene powerfully suggests that the girl is about to be sexually abused.

A second video, entitled 'Child Marriage', draws attention to the fact that 15 million under 18-year old girls are forced into child marriage every year. The 60-second film begins with a girl who demonstrates how to apply lip-gloss to camera, while a women who could be her mother brushes her hair. The tone darkens when an older lady enters with a wedding dress, which is fitted to the child before she is led away with a terrified look on her face.

The end line says: “Give girls a better future. The first 1000 days are the most important” and viewers are directed to an interactive platform that follows the 1000-days journey of a girl in a developing country. The site features an animated real-time infographic based on five elements – Food, Health, Education, Love and Play – each being crucial to a girl’s future.

Visitors are invited to donate, share or simply engage with one of the five elements. As they do the illustration changes – it enlarges to indicate the girl is well, but shrinks if there are no interactions.  The site also features videos, articles, stories and facts about Plan International’s work.

One of the biggest challenges NGOs face is proof of their success. With this platform people can see how their social share, donation or other interaction can make a difference to a girl’s life.  In the process it highlights how Plan International’s work makes a difference.

Tobias Wacker, creative director at hasan & partners said: “In the west it is easy to close your eyes to the issues girls face in developing countries.  Plan International Finland asks people to recognize the importance of a girl’s first 1000 days. It’s designed to spark debate about what can happen if they do not get support when they are at their most vulnerable.”