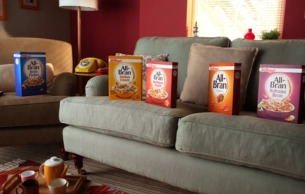 Kellogg’s, the leading cereal brand, today launches its sponsorship of popular Channel 4 gameshow Deal or No Deal, to promote its All-Bran cereal range.

The sponsorship deal has been managed by Carat and Channel 4 Sales and has been designed to position the All-Bran cereal range as the tasty breakfast choice that keeps you regular.

Starting yesterday, the sponsorship will run until December 2015 and will feature bespoke idents around Channel 4’s nail-biting show, Deal or No Deal, which will be played during the programme’s three centre breaks.

To bring the full All-Bran cereal range to life, creative agency Leo Burnett has designed sponsorship idents featuring entertaining and humorous All-Bran characters, each with their own identifiable personality. The light-hearted commentary delivered by the All-Bran boxes conveys the importance of selecting the right box, thereby reflecting the action in the show and also reminding consumers of All-Bran’s credentials in digestive health.

As part of the sponsorship deal, the All-Bran branding and idents will also feature on the series pages of Deal or No Deal on Channel 4’s on demand platform 4oD (soon to be All 4).

Dearbhla O’Boyle, European Media and Digital Manager at Kellogg’s said: “This sponsorship campaign is a way to keep All-Bran top of mind and remind consumers that it is not just the cereal brand to turn to when suffering from digestive problems. We want to change consumer perception of the All-Bran and position it as a great everyday breakfast choice that keeps you regular.”

Christina Qazi, Creative Solutions Executive at Carat, said:“This sponsorship is a fantastic opportunity for Kellogg’s to connect with Deal or No Deal’s broad audience to raise awareness and increase penetration of the whole All-Bran cereal range. By securing a regular presence for All-Bran on one of the most followed shows, we will be able to help Kellogg’s shift the traditional consumer perception of the brand and establish it as the everyday cereal of choice.”