There’s Something in the Water: The Challenges of Creating Liquid VFX 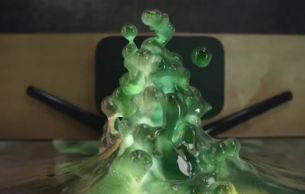 VFX and the technology that drives it is constantly evolving and it seems these days there is nothing that cannot be recreated on a computer. But despite massive advances in rendering power and creative wizardry, there is still room for improvement.

One of the holy grails of VFX, liquid remains one of the hardest substances to simulate. When LBB found out that it took the large team of VFX artists at the Mill over twelve months to create the impressive Sky Q ‘Fluid’ spot, we had to find out what was so difficult in making liquid come to life.

So LBB’s Rachael Delahunty caught up with some of The Mill’s masterminds behind the Sky Q spot, Creative Director Dan Williams, and CG Lead Francois Roisin, to find out just how it’s done.

LBB> Why is liquid so hard to make in post?

Francois Roisin> CG liquid can be really tricky to manipulate, especially when you want to be able to control the behaviour, quantity and viscosity in order to bring it to life.

Marrying VFX liquid simulations with animation is a huge challenge, and when it comes to ‘directing’ droplets and fluids - our Houdini (Side Effects’ 3D animation application software) artists have to think differently, using tools to slightly bend the rules of fluid behaviour while keeping a natural look and feel overall.

Dan Williams> Liquids are becoming easier to create as renderers get more powerful, but it’s still very difficult to make them look and feel real. Trying to choreograph fluid to behave in a certain way and yet still maintain a naturalness is particularly tricky.

LBB> What immediate challenges did you face in creating the liquid for Sky Q?

DW > I think the subjective nature of the job was one of the main challenges we faced. It’s one thing to generate fluid simulations in Houdini, but it’s another to make them beautiful. To me, this job was a perfect combination of creativity, craftsmanship and technical know-how.

None of us had seen liquid behave or look like this before, we also wanted the liquid to contain the images and pallette that we first see on the TV when they emerge, so the end result could have gone in many different directions.

FR > The CG liquid is the hero of this commercial, and crafting a journey with such a volatile element as fluids, whilst also retaining a natural motion, was a real tour de force.

It took us a lot of time to define our own language and then to explore the do’s and don’ts.

LBB> So how do you create such flawless droplets?

DW > We had to explore lots of different looks and behavioural routes before we were happy with their aesthetic and movement. Essentially we took something incredibly complex to control and choreograph, and then imbued it with a seamless simplicity, elegance and meaning.

In order to create water droplets with real depth and consistency, we have to treat the liquids differently to how they would normally be created. For Sky Q each droplet was made from an inner and outer shell. The inner membrane contained the refracted pixelated imagery from the original TV screen, whilst the outer acted as a magnifying lens to distort and exaggerate the vivid colours within each frame and provide a reflective surface for the filmed environment.

LBB> How much of the process was trial and error?

FR > Putting the fluids in motion was all about experimentation. In order to achieve realistic results the FX artists only had three parameters to play with (for a first pass of simulation): placement, speed and quantity, and that was it. The rest relied on what we were throwing the liquids on – what type of surface. Sometimes we would slightly shift the gravity direction (which would be the equivalent of tilting a practical set) to give the liquid more momentum.

We started by mimicking the real fluids we shot in slow motion, macro and on water repellent surface. Real fluids tended to lose momentum pretty quickly so we decided to add different temperatures within our CG fluids, so they would attract and repulse each other, only by a fraction, but by doing this, the liquid appeared to keep constant momentum while retaining a natural motion.

Once we were happy with the general behaviour of our fluid system, we started actual simulation in scenes, treating it as a real fluid, asking - should we use a pipette, syringe, cup, or even a bucket to throw our fluids in our set? How far? How fast? From where?

DW > We always tried to base our fluids on real-world examples and then push their behavior parameters in CGI to suit the narrative of the spot. Even with all our real references, most of our simulations took a lot of iterations before landing on something we were happy with. There were so many complex parameters involved that we had to just keep tweaking each time to get the right ‘performance’.

Another vital element to the success of the project was that we shot lots (26 hours!) of live action references of high speed droplets interacting with hydrophobic surfaces. We studied the footage at length, and made an edit of our favourite ‘real’ moments which became our visual bible. This meant we had something very real to base our simulations on. Although we were constantly playing with the gravity and velocity of our fluids, we never strayed too far away from the natural behavioural properties of actual liquids.

LBB> Did you have to build any software specifically for this?

DW > Although we worked primarily within the boundaries of existing packages, we did have to develop a bespoke CG pipeline to deal with such a unique set of parameters.

Some of the techniques such as drawing through projections directly onto the droplets were workflows that we’d never done before and were bespoke, created by the Mill, to solve the challenges involved in this project and the world of fluids.

FR > The software we used, Side Effects’ Houdini, offers a pretty solid fluid simulation system. It definitely does solve a lot of problems when it comes down to re-creating fluids in a conventional way (ocean, splashes, rain etc.). However, there isn’t any proprietary software to deal with animation as well as texturing for fluids. This is still far from being the typical scenario for FX work, that is why we had to create our own workflow.

LBB> What do you foresee as the next challenge for Liquid? Perhaps in VR / real time when it cannot be rendered?

DW > Real time fluids in VR would obviously be a bit of a Holy Grail. Being able to interact with real time artificial liquids would be an amazing experience. Also having control over it like we can in Houdini but in real time would be an incredible tool to play with. I still remember seeing astronauts messing around with liquid in zero gravity as a kid, and wishing I could do the same. Maybe that experience isn’t that far away…

FR > We are starting to see pretty convincing examples of real time water coming from the video game industry. Liquid, especially transparent, is really demanding in terms of computing power (it distorts and reflects everything that is around it) and I believe the advent of VR will push manufacturers to get more muscles in their devices (game consoles, PCs, smartphones), as well as developers to find new tricks to generate CG liquids at a cheaper computing cost.

LBB> Is there any other liquid created in post that you have been particularly impressed by?

DW > I’m consistently impressed by the fluid and particle work of KORB. Some of their work is utterly mesmerizing.

They did some work a few years ago where they produced some pieces that they developed in-house. They almost feel like art-installations, and show that simulations can be beautiful when they’re handled with delicacy and artistry.

The explosion piece ‘Gale’ was a major reference for us on Sky ‘Q’ because it had scale and impact but still felt completely filmic. ‘Infinity Water’ was also influential because it played with gravity and yet still felt tangible and real.

LBB> How far has CG liquid come in the past 15 years or so?

DW> It’s also a reminder of just how far fluid simulation and rendering have come in less than 10 years. A lot of VFX work that we once saw as groundbreaking can now seem fairly naive compared to what is achievable these days. As technology develops, so does the sophistication of the viewer’s eye – who knows what time pressures and resources they had to work with for this scene.

Today, in Houdini, the parameters of interaction and complexity now feel almost limitless. The rendering capabilities these days are so much more powerful and faster than they were 10-15 years ago, so the animator has the courage to take on much bigger shots. Now you can build a body of water, (like a giant wave) and follow it through its whole natural cycle.

LBB> Is there any advice / wisdom / insights you can give people tackling a complex liquid brief?

FR > First off, I would recommend building a strong team around the project. Software and computers are one thing but you can’t beat having great artists who will come up with creative solutions to answer an unusual problem. My take on VFX is to have the most down to earth, simple approach inspired by classic SFX, then and only then, we can use our CG toolboxes to enhance and emphasise the effects. I am always a bit wary of the fact that ANYTHING is possible with CG but it doesn’t mean ANYTHING can look good. As for any craftmanship, CG should be inspired by different fields, whether it is classic VFX, stop motion, animation, painting or sculpting.

DW > My advice to anyone tackling a complex liquid brief is to try and base its behaviour on as many real references as possible. Only then does it have a real filmic truth. Take HDRs of the environment that you’re then placing it in, as liquid reflects and refracts everything around it. It’s like a mirror, so be prepared to build/re-build its surroundings so that it can be bedded in correctly.

Shoot real liquid in the scene as a reference so you can match highlights and motion blur. Always look for interaction and drama within the scene. Can it pass between moments of light and shade, can it hit and dissipate against a corner or a surface? Make mood frames for look and also draw key-frames as with traditional animation to understand the overall movement. And finally it’s important to have a clear idea of where you’re going, before you try to get there!