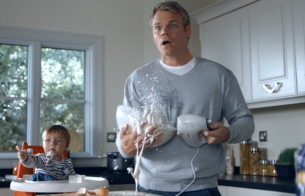 Saatchi & Saatchi London has launched a new campaign for the European Tour  called “Drama on the World Stage”, which focuses on the excitement created every time a professional golfer addresses the ball in front of thousands of spectators and millions of viewers.

The campaign introduces a new strapline, and aims to drive engagement from all levels of golf fans from diehards to the more casually interested.  It also aims to differentiate the European Tour – which takes place all over the world and has a fully international player contingent – from The PGA.

The launch comprises a 30 second broadcast spot which will run across global sports networks and a 60 second YouTube film which breaks on Wednesday, 25 February 2015. It will also feature social activity around #DramaOnTheWorldStage, including a competition to win the gear Martin Kaymer wears in the film.

The films, which star the pro golfer, along with Stephen Gallacher and commentators Paul McGinley and David Livingston, were shot in super slow-mo and focus on a central moment of drama, with vignettes capturing the reactions of people watching all over the world – from a camera operator filming in a crane on the course, to a distracted woman mid passionate kiss. The directors were Ben Murray and James Willis from Bullion, working in partnership with European Tour productions.

The new campaign follows the European Tour’s successful Every Shot Imaginable work, which showcased feats of golfing brilliance with ads including “Gong” and “Rory vs. the Robot”.

Rob Potts and Andy Jex, the executive creative directors of Saatchi & Saatchi London, said: “We've created a beautifully crafted epic spot to bring to life our new repositioning of the European Tour as the home of “Drama on the World Stage”. Why? Because drama is what golf is all about. Apart from Europe's victory over the USA in last summer’s Ryder Cup. That wasn't drama: it was a good old-fashioned thrashing.”