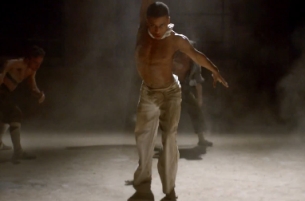 The bare-chested dancers in ‘Julia’ perform a mesmerising time-perfect routine to the entire track. The moves are a mixture of Brazilian Capoeira-style non-contact fighting stances with controlled modern moves to complement the contemporary mid-tempo 1970’s funk of Jungle’s sound.  The promos are typically a form of special choreography filmed in a minimalist setting to make the dance the main focus. ‘Julia’ is no exception, in this instance the dancers perform centre-focus on a dusty floor, which works as a device to throw up bursting clouds around the dancers when unsettled. The final shot concludes the series featuring the main dancers from all five of the videos (‘Platoon’, ‘Busy Earnin’,’ ‘Time’, ‘The Heat’ & ‘Julia’) combined.

Colourist Julien comments “I have worked with Oliver several times before but it was great to be able to grade another of Jungle’s promos. It was important for us to maintain the consistency of light throughout the film and enhance the warmth in the dancer’s skin tones, so that they stood out of the bare setting”

Director Oliver comments “Julien - what can I say about this lovely French man. Shame he is an Arsenal fan. This here is the pinnacle of the Jungle project. The perfect way to end the series. It has been great working on it with Julien. Bringing all that va va voom.”

Jungle is a modern soul music collective based in London and founded by Tom McFarland and Josh Lloyd-Watson. Their debut album Jungle was released through XL Recordings on 14 July 2014.