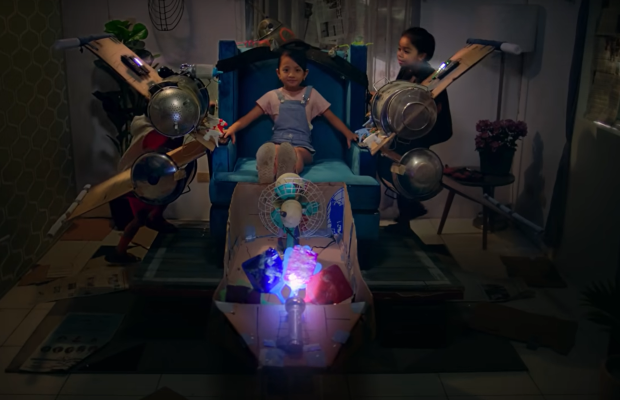 Globe Telecom and Wunderman Thompson Philippines have come together to bring back the simple joys of childhood with their newest campaign.

The story follows two boys on a mission to build an elaborate contraption. It is unclear what they’re building at first, but they run around town collecting materials consisting of a tire, plastic toys, some tinsel, and cardboard to name a few.

After a few failed attempts, the boys eventually come up with a model they’re satisfied with, and the contraption is revealed to be a spaceship.

Their intentions become clear as their friend arrives, and the boys lead her to take a seat in the makeshift spaceship. The ship is revealed to be a 4D cinema they’ve made just for her, screening one of the Star Wars films.

We find out there’s more to the story when they, out of breath from manually operating the machine, ask her if she liked it in sign language. In a heartwarming turn of events, it is revealed that their friend is in fact deaf, and they wanted to build her a Star Wars experience that transcended her disability, proving that epic and entertaining stories are made for everyone.

You can watch the spot below: