'Sunrise to Sunrise' follows the adventures of photographer Elsa Bleda 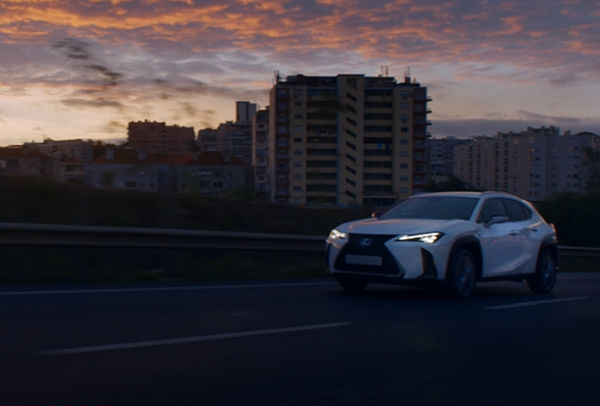 Lexus Europe and The&Partnership bring us Sunrise to Sunrise, the new pan-European campaign for the new Lexus UX self-charging Hybrid SUV. Regarded as a game-changer for the luxury car manufacturer, the car has been designed to appeal to a city-dwelling audience who love expanding their horizons and trying new things. The UX is a vehicle that pushes the boundaries; a fun, luxurious car with an efficient next generation self-charging hybrid engine.

“The new UX is one of the most significant launches ever for Lexus in Europe. It’s the only premium self-charging hybrid SUV in the segment and it offers great driving performance along with a distinctive design. Our campaign features photographer Elsa Bleda exploring the city in the UX searching for inspiration and new experiences, which perfectly captures the spirit of the audience for this vehicle,” said Lexus Europe general manager, Mike Tripp.

Shot over five days in Lisbon, Portugal, the 60-second commercial captures the adventures of photographer, Elsa Bleda as she explores the city. An artist who is known to have ‘a life in constant motion,’ Bleda’s photographs are renowned for being both elusive and familiar, whilst capturing a mood of dystopia through visibly desolate areas.

“The new Lexus UX was designed for people who live in the city and who love discovering new ideas and places. Elsa Bleda is a photographer that embodies this spirit; it’s clear that she sees the world differently, always searching for a new horizon. Through selecting her as our protagonist, we take the audience through a journey of discovery; never quite knowing what she’s looking for, but experiencing a place, a person, a moment with her” said executive creative director, Dave Bedwood, The&Partnership.

The majority of the film was shot on the Arri Alexa with Hawk Anamorphic lens, but some footage was captured on a 35mm film with an Arri 435, this gave tangibility and texture to the photography and a deeper aesthetic grain to the shoot. Photographer and lead, Elsa Bleda and director, Georgi Banks-Davies collaborated with each other from the start; sharing in prep a wealth of inspiration and mood imagery, from all their favourite photographers, film-makers, painters and artists.

“...We shared a visual sensibility so it was a brilliant process, I think we could sell our look book as a coffee table bible” said Georgi Banks-Davies, director, Skunk Films “I always saw this as a glimpse into the unique way Elsa see's the world, 24hr hours through her eyes. The intention was that the UX navigates us through her journey - the car sometimes the window the world, sometimes the vehicle to take us there. Each scene traverses a different hour in the day; light and the actions we see in the scene a clue as the hour. The film was designed almost like a dream, some moments fleeting and surreal, others more literal and lingering. The aim was to show the moments that happen in every city; the ones we never see, are always surrounding us.”

The launch is Lexus’ biggest media activation to date across Europe, maximising the brand halo and product potential of the all new Lexus UX. Due to be live across premium AV, OOH and digital channels, media will reach and engage a new audience of urban explorers, inspiring them to discover new horizons with the all new Lexus UX.

This multi-channel approach will be enriched with real-time audience data and time targeting, tailoring the ‘sunrise to sunrise’ creative concept to the media environment and consumer moments. The result is an audience first and data driven strategy, delivering powerful and emotional storytelling at scale, which showcases the three key benefits of a UX; striking design, advanced technology features and luxurious quality.