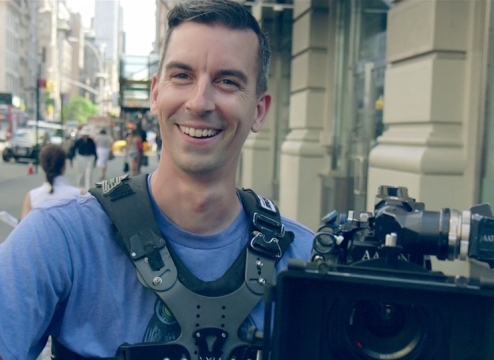 The unsung hero of Pharrell’s clap-happy pop video, the world’s greatest marriage proposal and a child’s fascination with dead pirates are the inspiration for a series of documentaries created by outdoor brand, Hi-Tec.

“The Walkumentary Series” is an online documentary project conceived and produced by Amsterdam-based agency this that + the other.  The films demonstrate how walking can lead to extraordinary things, and Hi-Tec inspires people to walk.

The first film, “Happy,” features Jon Beattie, the Steadicam operator who captured the action in Pharrell Williams’ acclaimed ”24 Hours of Happy” music video. With the song as its soundtrack, Jonathan narrates his bizarre filming experience walking backwards through the crowded streets of Los Angeles for 10 miles a day for 11 days, strapped to the 100-pound camera.

The second execution is a love story entitled “Yassan’s Proposal,” which documents the world’s biggest marriage proposal by the record-breaking Tokyo artist, Yassan.  Yassan quit his job and hit the road to spend half a year to walk across Japan and inscribe “Marry Me?” using the country as his canvas for the GPS artwork – a request that could be seen from space.

“Pirates” follows Sonia and Alexandre Poussin who embarked on a two-year Madagascan adventure with their children Ulysse and Philae in search of a mythical pirate burial plot. The French family navigate swamps and jungle accompanied by animated animals, including comedy crocodiles, parrots and iguanas that pop in and out of the story.

Ed van Wezel, chief executive of Hi-Tec, explains: “In an era where technology drives an ever-increasing pace of life, there is a need to slow down.  The simple act of walking can lead to extraordinary things and Hi-Tec inspires people to walk.”

Philip Brink, co-founder and head of ideas at this that + the other, adds: “The Walkumentary Series starts a conversation about the importance of taking time away from everyday life. Each film views walking from a different angle to make the viewer re-think the original mode of transportation.”

The Walkumentary Series is designed as a teaser prior to the launch of new walking products in 2015, reinforcing Hi-Tec’s position as the leading outdoor brand.

Production Company: this that + the other