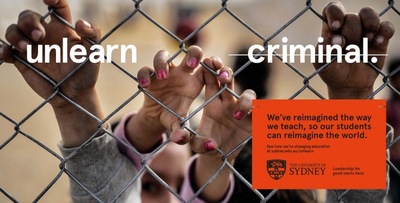 Establishing itself as a thought leader with a re-imagined approach to undergraduate education, The University of Sydney has launched its new brand campaign, Unlearn, created by The Monkeys.

The new curriculum will be on offer from 2018 and represents the most significant change to education the University of Sydney has undertaken in a generation. The university's new model aims to better prepare graduates to succeed in a world where the careers and jobs of the future will be very different from today.

Says Barbara Humphries, creative director, The Monkeys: "This is a bold direction for the University to take and a perfect example of their Leadership for Good positioning. Unlearning can take us to places conventional learning can't."

Says Johanna Lowe, deputy director, marketing and communications, The University of Sydney: "Giving our graduates the capacity to think critically and make a positive change in the world is at the heart of our undergraduate education model. The 'Unlearn' campaign reflects this progressive approach really well, and we hope it encourages our community to do some 'unlearning' too."
view more - Creative

Advertiser: The University of Sydney