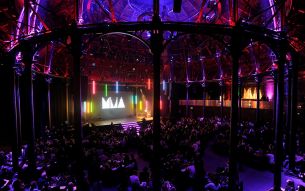 The UK Music Video Awards 2016 opens for entries today (June 23rd), accepting submissions from music video makers across the globe, and offering them a unique opportunity to gain recognition for their creative work.

Returning for the ninth year, and now bigger than ever, the UKMVAs 2016 will be honouring the people who create the music videos enjoyed by millions around the world every day – from the blockbusters for the global superstars, to the low budget gems created for up and coming artists. With a range of awards covering different music genres and also various roles in the music video making process – including direction, production, camerawork, animation and post-production – the UKMVAs is now accepting submissions via the dedicated website at www.ukmva.com.

This year, the UK Music Video Awards also comes with a fresh focus on seeking out new filmmaking talent. Five video categories are now aimed at newcomer directors creating music videos for five thousand pounds or less. There are also awards for UK and international artists, as well as a range of technical categories ranging from cinematography and production design, to colour grading, animation and visual effects. The latest advances in interactivity and virtual reality will be recognised in the Best Interactive Video category. And, as well as honouring the best work in music videos, there are also awards at the UKMVAs for other music films, including an award for the Best Music Documentary, and one for Best Live Music Coverage for direction of a live performance or concert for online, TV or cinema.

This year the awards will take place on Thursday 20th October, and return to legendary London venue The Roundhouse. Steeped in history, this classic venue has not only played host to musical performances from The Rolling Stones, Jimi Hendrix, The Doors, Led Zeppelin, David Bowie and The Clash, as well as the recent return of Radiohead, but has also become renowned as a primary venue for groundbreaking cultural events as well as a creative hub for young people in the UK.

Now an event with global reach, last year’s UK Music Video Awards saw nominations from filmmaking talent in the USA and Canada, Europe, Latin America, the Middle East and Asia, sitting alongside work by British talent. At the 2015 event, British director, David Wilson was the big winner of the night with four awards, while American director Colin Tilley picked up Video of the Year for his work for Kendrick Lamar. Meanwhile, Grammy-award winning British director David Mallet was presented with the Icon Award by Queen’s Roger Taylor, and was celebrated for his iconic work with David Bowie, Queen, Blondie, Boomtown Rats, AC/DC and others.

Longterm supporter of the awards, Panalux is already confirmed as sponsor of the highly competitive Best Cinematography award, while Electric Theatre Collective is once again backing the Best New Director category.

The UK Music Video Awards editorial director, David Knight, says, “With music videos playing such a huge role in how music reaches people now, the UKMVAs provides an important platform for recognising the incredible range of talent involved in making them. Music video has always been a playground for up and coming filmmakers, and creative space for visual ideas. It can incorporate all kinds of filmmaking, and it can also have its very own film language. In music videos, as in music, anything goes. It just has to work. The UKMVAs is here to celebrate the work that does exactly that.”

In recognition of this spirit of “anything goes” UKMVA’s art directors, StudioThomson are this year collaborating with artist Reilly to create the art campaign for the Awards.

The UK Music Video Awards 2016 is now open and accepting entries in over 30 separate categories, including genre-led awards, as well as specific technical and craft awards, and awards for individual producers, directors and commissioners. Entries can be made via the MVA website www.ukmva.com and the deadline is August 2.