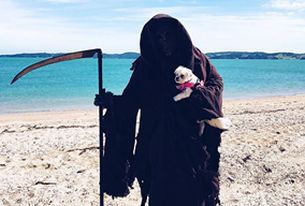 FCB New Zealand has launched its first campaign for Water Safety NZ in partnership with ACC. The Swim Reaper has been hanging out at swimming spots around New Zealand this summer. Armed with a seriously dark sense of humour, he’s been saving lives by ironically encouraging deaths.

The campaign aims to target young males, as they disproportionately make up more than one third of preventable drownings in New Zealand. A lot of these drownings wouldn’t occur, if young males simply made smarter decisions around water. However, this cynical audience reacts badly to being told what to do. Positive safety messaging simply doesn’t resonate with them. Instead, FCB took up a darkly comedic standpoint, under the creative tagline “Swim dumb and you’re done.”

The Swim Reaper is looking to claim as many lives as he can, but by openly encouraging young people to be dumb around water, he ironically ends up pointing out the stupid behaviours that can lead to fatalities.

After just five weeks The Swim Reaper’s photos and videos have had over 1 million views. His Instagram account has proved popular, earning more than 13,000 followers and more than 30,000 likes. And organic sharing of the campaign by fans has led to The Swim Reaper being profiled as a Staff Pick on imgur.com (the home of the internet’s most viral images). 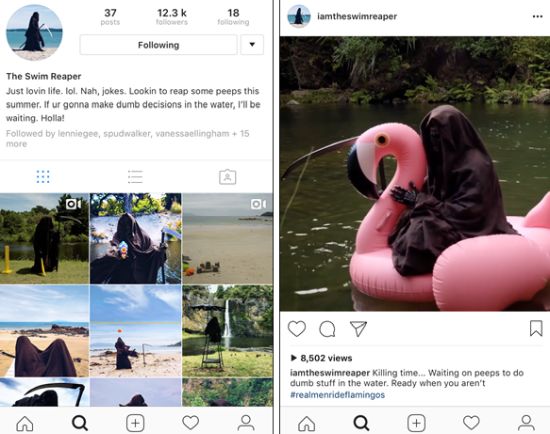 While the target group of young males normally make up more than one third of preventable drownings, this summer has seen a drastic decrease – despite the peak beach period having already been and gone, there have been zero drownings of young males to date, and overall, a 20% drop in total drownings.

Comments from followers of the campaign attest to its popularity, with people writing:

“This is hands down the best IG page.”

“Please acknowledge the existence of this ridiculous and genius account @ryanrodman.” 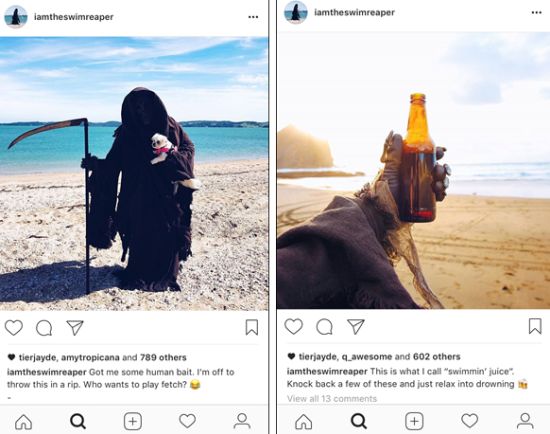 This type of campaign is a first for Water Safety NZ, as typically they have taken the route of more traditional campaigns to share their safety messages.

CEO Water Safety NZ Jonty Mills said, “The Swim Reaper campaign has been a great success. It’s raised awareness among young males that there can be fatal consequences for unsafe behaviour in, on or around water, without Water Safety NZ being the ‘fun police’. The humour of the campaign has engaged our target audience while delivering an important safety message - normally a difficult task considering the tendency is for young men to under estimate risks and over-estimate their ability”