The Sweeney Get More Than They Bargained For 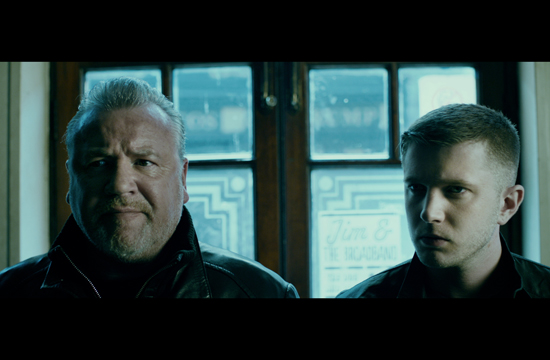 Orange today announced that The Sweeney’s crime-fighting duo, Jack Regan (Ray Winstone) and George Carter (Ben Drew), are set to star in the latest instalment of the Orange Gold Spot series, which will premier in cinemas nationwide on Friday 3rd of August.
The Sweeney ‘Gold Spot’ can be viewed at: http://bit.ly/T39Pc6

The new Gold Spot opens with Regan and Carter walking into an East End pub, ‘The Dog and Bone’, in search of a ‘potential target’. From the moment they step inside they immediately sense that trouble is brewing as a series of unusual clues unfold in front of their eyes, including Orange beer taps aptly named ‘Texters Brew’ and ‘Voicemail Ale’, a Bluetooth head set on Victorian painting of a lady, and the barmaid filing her orange nails at the bar. The Gold Spot climaxes with everyone in the pub staring at the dynamic pair, whilst singing the lyrics to the Electric Light Orchestra classic, Telephone Line. This gets all too much for Regan and Carter and they abandon their mission - fleeing the pub. As they do, a message reminds cinema goers to switch off their mobile phones before the film begins.
In the spot Regan says: “We only came in ‘cos Haskins gave us a lead on a target but we had no choice but to leave once they all started singing at us. Not a typical day for The Sweeney.” To which Carter adds: “Can’t believe we’ve been framed by Orange, I knew something was going down when the darts player asked me to call him.”
Spencer McHugh, Brand Director at Orange UK said: “It’s been fantastic teaming up with Regan and Carter, two of Britain’s most iconic detectives in what must be one of their most bizarre stakeouts yet. The Sweeney is set to be one of the biggest British box office hits of the year, so we’re sure that Orange customers and cinema-goers alike will really enjoy seeing what would have happened if Orange had been involved”.
The Gold Spot was produced by creative agency Fallon in collaboration with Orange and Vertigo Films.
The Sweeney Gold Spot is part of Orange’s ongoing association with film, which includes the highly successful Orange Wednesdays. Previous Orange Gold Spot campaigns include stars from films such as The Expendables 2, The Muppets, The A-Team and actors Spike Lee and Jack Black.
Credits
Creative agency: Fallon
Client & their job title: Spencer McHugh, Director of Brand, Orange UK
Executive Creative Director: Santiago Lucero
Creatives: Sam Hibbard and Dan Watts / Avril  Furness and Milo Carter
Group Account : Katrien DeBauw
Account Director: Emily Olson
Agency Planner: Gareth Goodall
Agency Producer: Tracy Stokes
Production Company: Smuggler
Director: Guy Shelmerdine
Producer: Chris Barrett
Post-production: MPC
Audio post-production: Wave
Media Agency: MEC
view more - Creative