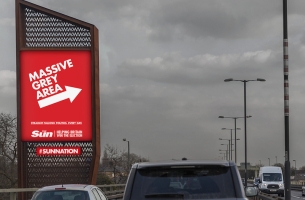 Grey London, part of WPP’s Team News, has created a high-profile campaign promoting The Sun’s straight-talking political coverage and its free-to-access #SunNation portal in the build up to the General Election on 7 May.

The copy-led, contextualised outdoor/print campaign revolves around the idea that, wherever your allegiances lie, The Sun’s political coverage cuts through the bluster to empower people to vote; ‘Helping Britain Win the Election’.

Several prominent outdoor media sites have been bought this week, with the ads themselves tailored to the specific locations they appear in, as well as the general confusion many people feel in the lead up to the election.