Behind the Work 774 Add to collection 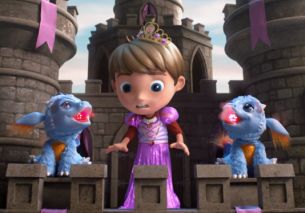 The seemingly innocuous world of children’s toys has become a political minefield over recent years. Toys are increasingly marketed along gendered lines – pink and princess for girls, construction and action for boys. And parents are pretty pissed off.

But this week one UK toy store decided to take a stand against gender stereotyping. Smyths Toys, along with its agency McCann Manchester, Outsider director Henry Littlechild and character design, CGI and animation from MPC, launched ‘If I Were A Toy’, an animated story that uses the lyrics of Beyoncé’s ‘If I Were A Boy’. It takes the viewer on a journey through the imagination of a young boy called Oscar. Oscar imagines life as various toys, such as a rocket, a Millennium Falcon pilot and a dancing bug. But the scene that’s earned the brand praise from the likes of The Huffington Post, Mashable and the Metro is the one that sees Oscar donning a pink dress and crown and waving to his subjects from atop a castle. The scene of Oscar dressed as a princess has led to a flurry of social media praise and over 500,000 people have now viewed the spot since it was posted on YouTube on Friday 23rd September.

LBB> What was the initial brief like from Smyths?

McCann> The brief was simple: make Smyths Toys famous. No pressure then.

LBB> And Henry, why was this job something you were keen to get involved in?

Henry> It was a compelling script, and the fact that we could use the Beyoncé song was a unique opportunity. At the same time, it was pretty open in terms of approach. That it incorporated many things I’ve done before, but never all at the same time - animation, character design, music, effects, live action - was a pretty exciting proposition for a director.

LBB> How early on did it come up in conversation to have Oscar playing with non-stereotypical toys?

McCann> As a creative team we’ve previously worked with Smyths and it’s important the campaign always appeals to both girls and boys. We always make sure there are just as many Transformers as there are My Little Ponies. Smyths stores don’t segregate their toys into girls and boys aisles, so why should their ads?

LBB> What were your main aims with the dress scene?

McCann> Oscar gets so lost in his imagination that anything goes. If he’s imagining life as a toy, there’s no way he wasn’t going to end up at a princess castle. Plus it’s a nice bit of humour for the adults. We’ve all had a rummage in the dressing up box as kids.

LBB> Being a toy ad, it’s obviously aimed at children, but also at their parents - how did that play a role in the overarching theme?

McCann> Disney and Pixar nail it every time. Their humour works on a level that kids and parents enjoy equally. So we wanted the ad to have the same effect. We also know from experience that kids play stuff they like online over and over again, so it’s important it doesn’t drive parents crazy at the same time.

LBB> To make the point properly, you had to normalise the Queen part as much as possible. But also, you obviously had to draw attention to it. Henry, as the director, how tricky was it to strike that balance?

Henry> It’s something that happened as we went along in the animation process. Although we wanted to make a point, we didn’t want to make a big deal of the Queen part either. It was primarily a slapstick gag, with an interesting twist. This scene was finessed many times to strike the right tone. Hopefully we did that.

LBB> Why was animation the right route to tell this story?

Henry> Having a main character that was animated completely freed us up in terms of narrative and where we could go with it. We suddenly weren’t restricted to toys in a shop - he could fly in space, do anything we wanted. However we wanted to ground it in reality to an extent, so the animated boy is interacting with real toys that we shot in various sets - the castle, toy shelves, the disco and so on.

LBB> Aside from the obvious rhyme, why did you settle on a re-jig Beyoncé’s ‘If I Were A Boy’ to soundtrack the film?

McCann> The song is about yearning and imagining being someone else for a day. So a boy who longed to be a toy felt just right. It loaned itself surprisingly well to a cover, and in terms of fame, you can’t really get bigger than Beyoncé. Plus, with her being a mum, we felt that resonated nicely with our audience.

LBB> Did you expect it to garner so much reaction?

McCann> We’re over the moon with the reaction. It’s definitely not what we were expecting and everything we'd hoped for. We simply set out to create a fantastic piece of work that would make the brand even more famous.

Henry> There was much discussion about the dress part, but no, we didn’t expect it. We always felt that the ad could be something striking, as no one has done the Pixar style thing to any great degree. Part of this style is not going for the obvious in terms of humour and storytelling.

LBB> There’s a lot of conversation in adland about diversity representation - do more brands need to follow in Smyths’ footsteps?

McCann> We saw an opportunity in that no one had tackled this issue to a younger market and we felt it important to send out the right message. If anyone takes this as a cue to do the same, we’re flattered, and right behind them.

Henry> I think so. It’s too easy to fall into lazy blue is for boys, pink is for girls. I think this comes from a presumption when talking to the viewer. It’s convenient to put people into boxes. I hope we’ve created something truer by not doing this.

McCann> Toys are toys to us, and that’s the beauty of Smyths. There’s something for everyone and no rules about who plays with what. We can see the campaign has massive potential, and if we were a toy, we’d be excited to see what happens next.

Henry> If you could recommend me to Pixar for their next feature, that would be great.