The Speckled History of the Video and Music Industry 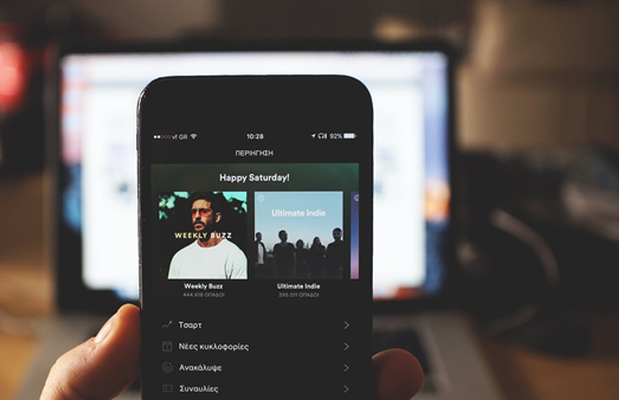 For as long as it's possible to remember, the video industry and the music industry have existed side by side occasionally meeting in the middle. Like a pair of siblings who co-exist with bedrooms across the hall from each other.  Bonding over a loose ‘entertainment’ lineage, the two show a disinterest in each other’s existence yet borrow from one another when convenient - a sync here, a video trailer there... They leverage their position at the expense of the other, often harnessing the better deal for themselves with the defence of marketing – the cheap licensing of a top ten record for the sake of 30 seconds of exposure on a Netflix miniseries. Progress in their own industries respectively trumps the perceived value of the other. When all is said and done, at the end of the day, they’re competing for every consumers' attention span. We’ve reached peak attention economy – video and music alike.

A brief history of:

Recently I’ve found myself exploring the collapse of Blockbuster, the rise of Netflix and the curious middle ground in which they found their worlds colliding. Like any good love story, sacrifice had to be made and all too soon after they met followed the fatal departure of Blockbuster. Blockbuster CEO, Jim Keyes, should be held accountable for failing to prepare for the slow end of the business. From a very distant perspective, Keyes didn’t appear to even consider any strategy of how to handle the companies demise gracefully. Famously quoting “neither RedBox nor Netflix are even on the radar screen in terms of competition” only two years prior to them being wiped out by the competition. Hindsight is 20:20, and there’s no doubt it’s much easier to make these judgements today looking at a bankrupt Blockbuster whilst Netflix currently boats approximately $26 billion net worth.

The question I keep asking myself is why would good management ultimately change direction if they have a customer base who want what they are selling? That would be a very risky decision, in fact that could be viewed as a hugely poor management decision to remove focus from their core business to look at a brand-new disruptive technology. If I was a shareholder, I think I would be questioning the sanity of the leadership team. The trick then should lie in finding a balance, balancing the new vision with the existing direction. However, I do wonder why Blockbuster didn’t try to acquire Netflix when they had the chance, that can only be blamed on arrogance and a lack of vision. Leadership is ultimately at fault for failing to identify the true problem, which was that the consumer wanted something different… Napster anyone? 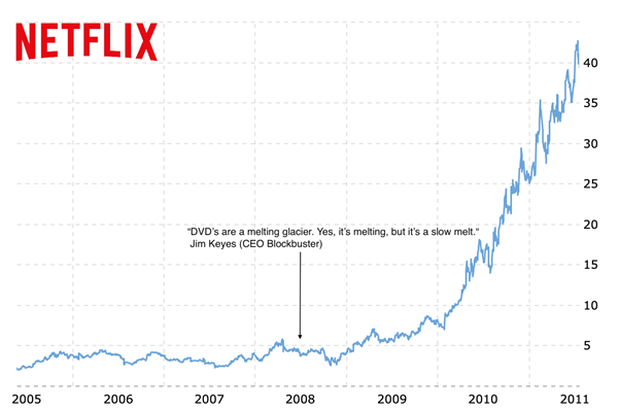 When Napster arrived on the scene, it was a fully cohesive 2019 company with social media, streaming and downloads all at the consumers finger tips and they loved it. Consumers wanted it and they did whatever they could to get it. The music industry turned its back and started to brutalise the kids in their bedrooms for their progressive approach to consumption. Rather than asking themselves why this was happening, the big three major labels (Sony, Universal and Warner Records) protected heritage income streams in the hope to stall progress. I’m not the first person nor the last to say it but why one or all of the major labels didn’t acquire and monetise Napster can only be regarded as a fatal error. Imagine being the first label to sell all your catalogue to fans for say £9.99 per month, hello market share.

Huzzah! Here we are in 2020 and progress has been made, and we’re finally monetising streaming services - but there’s a significant argument to suggest that the music streaming platforms specifically aren’t monetising their services effectively. My gym offers me a multitude of subscription options, I can pay per visit, or per month, I can pay for a select amount of usages depending on what kind of consumer I am and what I need. Netflix offers me three tiers of subscription with no opportunity for free service access, if I want content I have to attribute a level of value to that content I’m consuming. However, the music industry is sliding behind and within that oligopoly there’s only two-tier options – paid or not paid. As of April 2019 Spotify has approximately 100 million freemium users, meaning a change in their subscriptions tiers potentially turning freemium into a £4.99 model could literally turn the industry on its head overnight. You don’t need to do the math in order to understand how improving the one sized fits all model could create significant impact. Fear of churn and loss of market share are likely reasons for the hesitation in failure to provide a smarter monetisation structure.

Yet flipping back over to the video streaming platforms, film and TV provides so many options – Sky, Disney +, HBO now, Hulu, Amazon Prime, Apple TV – the list goes on and they all provide a combination of exclusive and owned content. There is a huge amount of churn in front of us yet to happen within this space. The video streaming platforms will be forced to consolidate into a series of eco-systems in order to offer the best value for their customers. For once the music industry has a head start, they’ve consolidated to a few major players who are forced to improve their platform technology rather than their content offering.

Some final thoughts to leave you with is that Spotify launched April 23 2006, it has been over 13 years since the last big innovation in the music industry. It’s time for the next iteration of innovation and change, maybe 5G will bring something new.

I can’t help spare a thought for the publishing industry, a brutal reality lies ahead with two gleaming examples of what to do and what not to do. Innovation and adaptability will provide crucial pillars of opportunity for new concepts and ideas to break free, lets hope their leadership is more open minded.

In the meantime, grab the popcorn and start streaming.