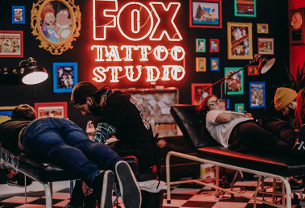 FOX Channels has teamed up with creative studio Black Ship to create a permanent tattoo studio, where fans of The Simpsons, Family Guy, The Walking Dead and more can get their favourite characters immortalised on their skin.

The project took place in the last edition of Comic Con Portugal, which in December brought together more than 70 thousand pop culture enthusiasts to Oporto, becoming the largest event of its kind ever held in the country.

Conceived by the creative studio Black Ship, FOX Tattoo Studio provided to the audience a literally unforgettable experience. Along 4 days, 4 local artists have brought to life more than 80 tattoo options related to the prestigious series of FOX and FOX Comedy, such as The Simpsons, The Walking Dead, Family Guy, Prison Break, Futurama, American Horror Story, American Dad, How I Met Your Mother, among others.

For free, the sessions could be pre-booked both on the event and online, what resulted in the occupation of 100% of the vacancies available on the very first day of the project. Still, dozens of fans waited in the line.

In total, over 100 people carved on their skin the characters, logos, objects and quotes of their favourite series. In the meanwhile, thousands were watching via livestream on social networks.

According to the brand, though the FOX Tattoo Studio was initially designed for Comic Con Portugal, it will possibly be repeated in other future opportunities inside or outside Portugal, such was the acceptance of the public.