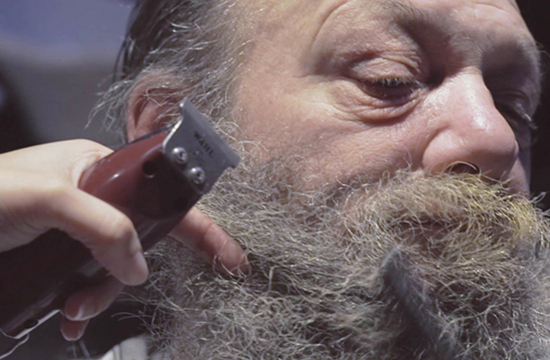 The Salvation Army organises a number of Christmas dinners for the homeless every year. Another one was added in Amsterdam last Christmas. Guided by the concept that a little attention can do a person a world of good, advertising agency Draftfcb, Barber Amsterdam, concept store Hutspot and production company In Case Of Fire joined forces to put on an extraordinary Christmas dinner for homeless people who were invited through the Salvation Army.

You naturally always show up looking your best at a Christmas dinner. That’s why we gave the homeless men a helping hand. The professional barbers of Barber Amsterdam made sure the men were impeccably groomed when they took their place at the table at Hutspot Café. Their hair, moustaches and beards were given a ‘Cut for Christmas’.

A photographer took portraits of the men before and after their cut and shave. The homeless men were also given an Ontour brand sweater or shirt. Hutspot Café and artisan sausage makers Brandt & Levie then served a Christmas feast.

The photographs are proof that just paying a little attention did the homeless men a world of good.

It symbolises the attention the Salvation Army is committed to giving these homeless people every day of the year. A contribution helps ensure they can continue to receive this attention after Christmas as well.

You can support the Salvation Army by either making a direct donation or buying ‘Cut for Christmas’ postcards.

One of the homeless men plays a starring role in this video. His name is Allen – a 62-year-old Canadian who ended up in Amsterdam after roaming from place to place. He takes you on a tour of his life. He shows you where he spends his days and where he sleeps at night. And he also tells you what could make his life a bit better. He says just a little bit of attention does him a world of good.

A set of postcards featuring the before and after portraits that photographer Kees Rijken took of the homeless men can be ordered at http://gupgallery.com/photo-books-magazines/photo-books/ salvation-post-cards The proceeds of the sales will go to the Salvation Army.