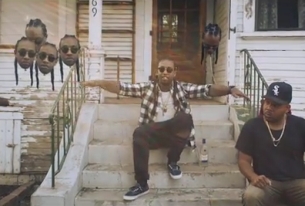 The visuals are true to Ty’s roots. Shot in LA, Boyle Heights and south central, there is always a sense of danger and  it contains all the ingredients expected of a rap video with respect!

Cars, drink, girls but with a twist.   Everyone in the neighbourhood, including Ty, carries a second version of their head everywhere with them, floating on a string like a balloon.

The Sacred Egg said: “Ty was an unexpected joy to work with, his balloon head wasn’t always so collaborative”