Engine Creative tells the story of Lt. Raj, a serving Naval officer in the Submariner service 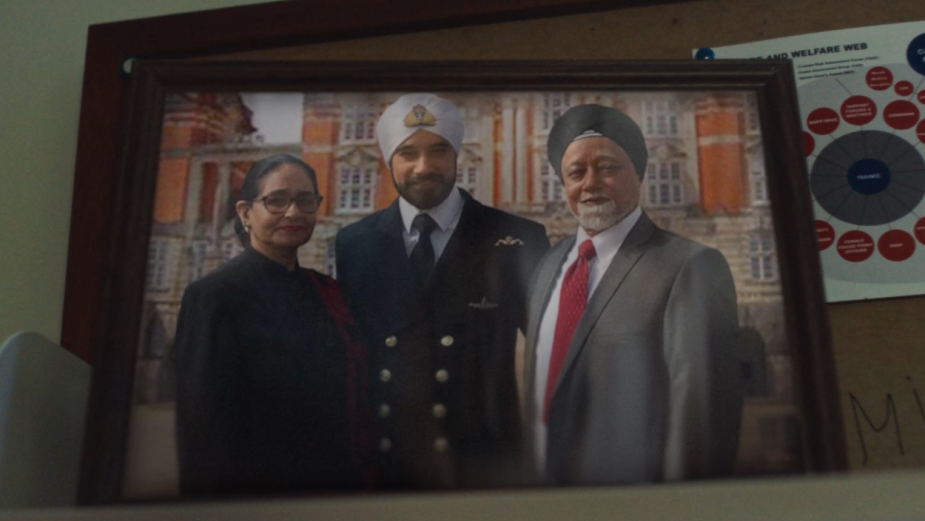 The Royal Navy is launching a powerful new TV recruitment campaign focussing on the complexities of cultural identity in the UK.

The ad, created by agency Engine Creative, called ‘Raj’s Story’, tells the story of Lt. Raj, a serving Naval officer in the Submariner service, and explores his childhood growing up between two cultures in West London. It was runner-up in the Channel 4 diversity competition, which focused on the authentic portrayal of UK BAME cultures.

The 60-second film, which runs for two weeks from 6th September on C4 and 4OD, takes a subtle twist on the “Made in the Royal Navy” campaign created by Engine Creative, which shows how the Royal Navy has helped individual recruits become the best version of themselves.

Directed by FAMILIA's Sashinski, the film explores how difficult it can be to understand your own identity growing up as an ethnic minority in the UK, stuck between cultures. But shows that the sense of belonging found in the Royal Navy can help you discover pride in who you are.

The film shows Lt. Raj tying his turban before a parade and reflecting on his childhood. It tells the story of how he drifted away from his Sikh culture as a boy and then, to the disapproval of his family, joined the Royal Navy. In a voiceover, Raj says that the sense of belonging he found in the Royal Navy helped him to rediscover pride in where he came from and claim back his Sikh identity.

Paul Colley, Head of Marketing, Recruitment and Attraction at Royal Navy, said: “This film came about through the opportunity that C4 presented with their Diversity in Advertising award. The £250,000 of free air time allowed the Royal Navy to provide a different and indeed unique insight into life in the Royal Navy through the eyes of serving Lt Raj. His story is a reflection of diversity in its truest sense and the life you can lead in the Royal Navy.”

Billy Faithfull, Chief Creative Officer at Engine Creative, said: “Made In The Royal Navy is only as successful as it is authentic. When we heard about Raj’s life from the man himself, it was a complex story of conflict and dual identity in a part of British society, Sikhism, you never see in advertising. We’re proud to have played a part in shining a little light on this underrepresented culture, and add another authentic chapter to the ‘Made In’ story.”

Major Daljinder Virdee, Chairman of The Defence Sikh Network said, “Raj’s story showcases what many young Sikh’s face growing up. The Sikh identity is distinctive and has a long and proud tradition. Like Raj, the Armed Forces helped me discover more about my Sikh heritage and ultimately myself. The Defence Sikh Network is grateful to have been involved in guiding this project and to have for the first time a Sikh character at the heart of an Armed Forces advert.”

Director Sashinski comments: “I immediately resonated with the script. Raj’s Story was both personal and powerful. It evoked that feeling of not fitting-in. Of being an outsider. And the self-discovery that comes with purpose, age and memory. A great deal of care and sensitivity had been invested in the script. Chris and Hugo conducted extensive research and had carried out lengthy zoom calls with Raj and other members of his family. I delved into the material, and also had conversations with Raj, and his parents, who were incredibly open with us. Once I commenced research, I discovered that Raj and I had many things in common: We were born in the same year, both grew up in West London and both had fathers that emigrated to London from Kenya. Like Raj, my background is also of Asian heritage, so the parts of the story in which Raj’s attempts to blend-in and subdue his ethnicity, culture and heritage are things that I too did. There was so much personal, lived-experience to draw from. Connecting who we are as adults, with our experiences as children, was one of our central themes, and I really wanted to explore that with Raj’s Story.”

He adds: “We rarely see anyone from the Sikh community on British television. That was perhaps the main reason we were so excited to tell Raj’s Story, combining this with how he came to join the Royal Navy, and what positive impact this experience had on his recognition of his culture and heritage. It’s a modern-day British story of hope, ambition and identity that we hope will illicit an emotional response.”

Campbell Beaton, Producer at FAMILIA, adds: “Raj's Story was so incredibly rich that it would’ve been impossible to tell his story in the usual format. It was suited to more of a short-film approach, allowing us to recreate the significant and pivotal milestones of his unique journey across a four-day shoot, which because of talent availability, we shot in reverse-order. With the backing of the Royal Navy, we were able to really document the parts of Raj’s Story before he joined the Royal Navy which is quite different from their previous films which focus on characters after they’ve joined. Seeing so much of Raj’s childhood, for me, adds to the film’s sense of emotion and authenticity. We knew when making-it, it was going to be nuanced and personal, this allowed us to really approach this with a short-film mentality, and we are so grateful to our familial cast and crew who investested so much of themselves in the project.”

Engine Creative’s chief creative officer on the campaign was Billy Faithfull, the art director was Hugo Isaacs and copywriter was Chris Da Roza.