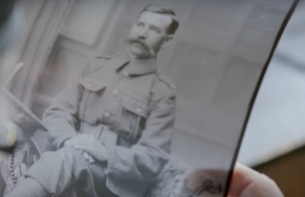 RKCR/Y&R has launched its latest brand campaign for The Royal British Legion to mark this year’s Poppy Appeal.

This poignant campaign meticulously recreates portraits of First World War soldiers with modern Service men, women and veterans. This juxtaposition reminds audiences that The Royal British Legion’s Poppy Appeal supports both the Armed Forces men and women of the past, and those of today.

To create the work, portraits of modern veterans and serving personnel were photographed by Tom Reeves in the world’s oldest running photography studio.

These powerful images were captured using the exact same camera, technique, and hand-painted background as Tom’s grandfather, Benjamin Reeves, used to photograph First World War soldiers in 1915. It was the first time the camera had been used in over 65 years.

The portraits will become the centerpiece of a national integrated campaign that includes online films and interviews, print, outdoor, social and digital.

The photographic series will also be exhibited between Friday 06/11/2015 and Sunday 29/11/2015 at the National Media Museum, who donated their space to house the photographs.

The men and women that sat for the modern portraits have diverse and touching stories; from Gunner Mark Stonelake, a former Army Commando who had his left leg amputated in December 2008 in Afghanistan, when the vehicle he was driving hit a roadside bomb, to Staff Sergeant Alan Hughes, who lost his sight in a peacekeeping mission in Northern Ireland and has been supported by the Legion ever since.

Gary Ryan, Director of Marketing and Communications at The Royal British Legion, said: “We hope the Poppy Appeal 2015 brand campaign will encourage the British public to uncover the stories behind the poppy. The poppy is a powerful symbol of Remembrance and hope, which is perfectly articulated in our campaign featuring Service personnel from the First World War and our modern day beneficiaries.”