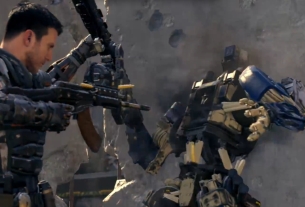 The teaser opens and begs the question, “how far are you willing to go?”  With this mysterious narrative we enter into the latest entry for Activision’s Call of Duty: Black Ops 3.  The newest title in the Black Ops series is the sequel to the two most played Call of Duty games in history.

Ant Farm collaborated with publisher Activision and its award-winning developer Treyarch to produce and create both the teaser trailer and the gameplay reveal trailer for the next blockbuster in the Call of Duty franchise.

Released on April 9, the teaser trailer takes the viewer on a visual and audial journey through Black Ops history, running into familiar voices and faces harkening back to fan favorite and epic moments in the series.  Ant Farm recreated the original Blacks Ops icons out of data, along with a tease reveal of the latest icon. In addition, numerous easter eggs are wrapped within the body of the teaser, giving the Call of Duty community plenty to decipher as they searched for game clues.

Ant Farm then returned in culminating fashion with the release of the official Call of Duty: Black Ops 3 Gameplay Reveal Trailer, which featured gameplay footage directed in-house at Ant Farm, as the team worked closely with Activision and Treyarch.

“The fans have come to know and love the Black Ops branch of the Call of Duty franchise and are expecting only the best.  There’s so much to work from in this title through the diverse nature of content in Black Ops 3, that it afforded us with the tools to collaborate and craft an amazing teaser and gameplay reveal that took fans on a journey, then blew them away,” said Ant Farm, Creative Director Ryan Vickers.