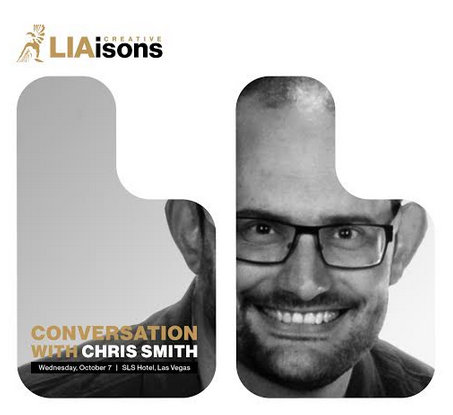 Chris Smith, group creative director of The Richards Group, has been announced as a speaker at the London International Awards 2015 Creative LIAisons program.

“I am very surprised and honoured to be asked to speak as part of the Creative LIAisons. Well, more honoured than surprised. Actually, it’s about even. Maybe 60/40,” said Smith.

“In the years I’ve been on LIA radio juries, I’ve often taken breaks from judging to hear some of the speeches and I’ve always been impressed both with the knowledge and skill of the presenters, and the attentiveness and enthusiasm of the student audiences,” he said,

“Ralph van Dijk’s presentations on effective radio creativity have always been particularly good, so I hope I can follow in his footsteps and tell the kids something helpful in a way that passes for entertaining. I mean, Ralph’s talks were mostly interesting because of his charming Antipodean accent, which I don’t have. So I may try on a Scottish burr. Maybe Dutch.”

Creative LIAisons (formerly known as ‘Creative Conversations’) runs concurrently with the LIA judging in Las Vegas and is LIA's way of giving back to the industry. This mentoring program is fully funded by LIA, encompassing travel, accommodations, rewarding speaker presentations, a peek into the statue deliberations and various networking opportunities with jurors and speakers in a relaxed social setting.

In his two decades in advertising, Smith has written for some of America's best-known brands, including Motel 6, Zales, The Home Depot, 7-Eleven, Red Lobster and Amstel Light. His work has garnered him shiny paperweights from Communication Arts, The One Show, and London International Awards, plus some Emmys, Effies, Clios, and Addys. He has been fortunate enough to have his name engraved as writer or creative director on four Radio Mercury Awards, including the $100,000 Grand Prize in 2009.

Smith has moonlighted as an improv and stand-up comedian and voice-over performer for over 17 years. He has written articles for mental_floss magazine and jokes for television. He has also co-authored three books of Trivia published by HarperCollins. Speaking of trivia, he is a two-time Jeopardy! champion. A native of upstate New York and graduate of Penn State, he lives in Dallas, Texas with his wife and three children.

The LIA 2015 Entry System is now accepting entries through August. Judging will take place from 1st October to 10th October. The shortlists will be announced as each judging session concludes, with winners being announced 10th November. For more information on submissions and eligibility please visit www.liaawards.com/enter/eligibility/

To find out more about LIA, visit www.liaawards.com