The Richards Group 'Blow' for RAM 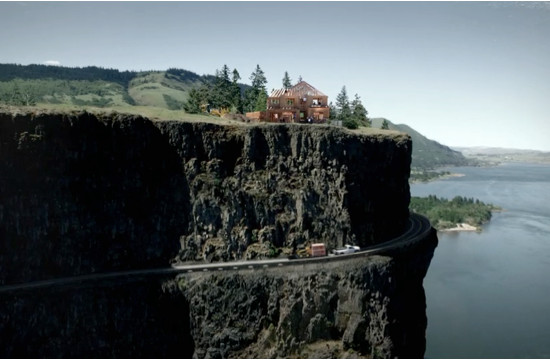 Dallas/Santa Monica-based digital studio Reel FX puts the powerful features of RAM Commercial trucks to the test in a new :30, “Blow,” for RAM out of The Richards Group, Dallas, TX. The spot features the latest truck from RAM’s commercial fleet smoothly hauling a hefty load of construction equipment up a winding road, or on a craggy precipice with ease.

To successfully illustrate the degree to which RAM commercial trucks   defy gravity and physics to get the job done, extreme imagery was required. Reel FX was brought on board to create the desired picturesque—and intimidating—scenescape. In order to create the final composite for the expansive shot of the perilous mountain road, the team knit together original helicopter footage with 3D CGI elements created to match the rocky look of the environment as well as adding a photo-real CGI truck and trailer. To achieve this, they digitally camera tracked the original helicopter footage, which gave the team a realistic camera move, literally mimicking the path the helicopter took when the footage was shot. Next, the team created 3D geometry of the new road and surrounding cliffside and digitally mapped hand-made matte paintings onto the road and cliff geometry. The final, and most important, step was the digital compositing where the team seamlessly put all of the elements together.

Notes VFX Supervisor/Creative Director Kevin Althans, “The pinnacle of this commercial shows a mighty RAM commercial-grade truck winding it’s way up a treacherous mountain road, hauling construction supplies to a very remote homestead site. As is always the case in film and TV, no such vista existed with a perfect combination of elements. So, we took plate photography provided by directors, The Chartrans, of Lucky21 and augmented it with a new mountain road and a fully CG house on top of the cliff. The final composite gives up everything in one quick view: the truck, deep scenery, a treacherous road and an epic home under construction.”

“Blow” opens on close-up shots of the daily grind of a construction site. After the heavy strike of a hammer on a fresh piece of lumber and a truck wheel kicking up fresh dirt, the shots open wider. We intercut between the construction site and a fully loaded white RAM making its way up a sloping mountain road. A voiceover begins, “Some question physics. Some question gravity. And some even have the audacity to question improbability.” We take a closer look at the truck’s rugged features while supers for “Best-in-class 30,000 lb towing” and “Best-in-class 850 lb-ft torque” appear. As the truck nimbly arrives at the site, the voiceover concludes, “These are some of the bold new RAM commercial trucks, built to blow your imagination.” The spot closes on a muscular, animated RAM Commercial logo and final voiceover, “Guts, glory, RAM.”