The Race is On for London's 2017 Summer of World Athletics 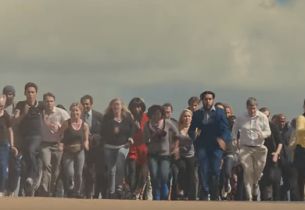 ‘The Race Is On’ ticketing campaign for the biggest sporting event of 2017, the World ParaAthletics Championships and the IAAF World Championships London 2017, launched this week as 1.5million tickets were placed on general sale.

The creative campaign, including a mix of regional and national print, digital, outdoor and social media advertising, is spearheaded by a 90-second film released this week and is set to galvanise the nation and recreate the spirit and passion for major sporting events hosted in London.

The film opens with the nation’s favourite long-distance superstar and former World Champion, Paula Radcliffe, who sets about her daily run only to be overtaken by an eager member of the public in what transpires to be the nation racing to get to The Stadium, Queen Elizabeth Olympic Park. As the film continues, athletic greats including former World Record holder and Olympic medallist Colin Jackson, Paralympic gold medallists David Weir and Jonnie Peacock, and heptathlete Katarina Johnson-Thompson all find themselves in a race against the public - man, woman, child and even lawnmower in tow – across the back drop of London, all eager to be part of 2017’s biggest event, back at the stadium which captured the nation in 2012.

The creative concept drives the message that ‘The Race Is On’ to be part of yet another truly special summer of athletics in London and brings to life that the event is open to all - part of the organising committee’s vision and highlighted through their accessible pricing strategy with a focus on low entry ticket prices and family offers.

The film supports the national outdoor, print and digital marketing campaign which features current World Champion and Olympic medallist Mo Farah and Paralympic gold medallist David Weir. The campaign creative blends the strong imagery of athletes and the iconic stadium at the Queen Elizabeth Olympic Park and is supported by a targeted national and regional PR and CRM campaign which will run throughout August and September 2016 to promote ticket sales.

Heather Reading, Head of Marketing for London 2017 Ltd said: "We are excited to launch 'The Race Is On' campaign and raise the awareness of our ticket application window. Together with BBH Sport, we have worked hard to bring to life the excitement and inclusivity that we hope to see as part of the summer of world athletics in 2017 in our creative. Whether people attended London 2012 or a major event since, this will be the biggest sporting event of 2017 and we want to encourage athletics fans, event seekers and the wider general public to apply for tickets at tickets.london2017athletics.com."

BBH Sport Managing Partner, Luisa Fernandez, said: "The World ParaAthletics Championships and IAAF World Championships in 2017, gives the nation and the watching world yet another opportunity to be part of a major sporting event in London. The 'Race Is On' campaign appeals not only to fans of athletics but targets the broad consumer and event seeker market, with a particular focus on families. The campaign drives a sense of urgency to be part of a unique event that is open to all. Celebrating the iconic Stadium at The Queen Elizabeth Olympic Park and some of the nation's favourite athletes and Para-athletes throughout the campaign, we hope to engage the nation and build excitement so they join in and are part this fantastic summer of athletics."