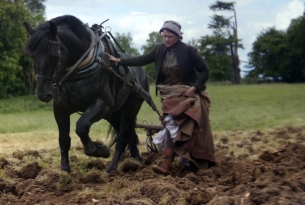 Paul was on set for a few days in London and Norfolk as time was key on this huge production, taking in 7 locations over 7 days; from Wells for the RNLI scene to Lambeth for the milkman scene.  There was even a second unit in a barn filming a very pregnant horse waiting for the big moment in the foal scene!!

On approaching the edit Paul comments,  “Each era was so well covered by Sam, that we basically edited 7 mini-drama’s and then had to go through the painful process of dismantling the things we loved to bring them together in one spot.  But as is often the way, this process brought about new connections which had their own merit”

A film of this scale was not without its challenges, not least the turnaround time from the last shoot day to delivering the first cut, a testament to both Sam and Paul’s talent and collaboration as they crafted together a film that delivered both moving moments and authentic performances.