The Plight of ‘The Bank of Mum & Dad’ 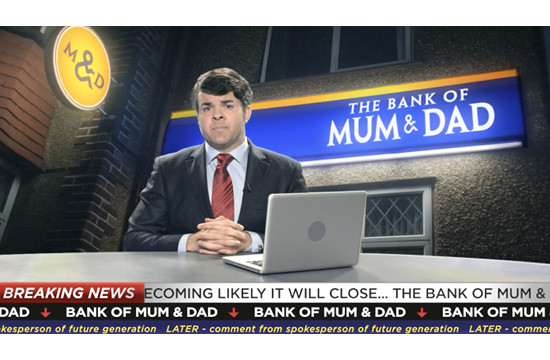 Shelter recently appointed Leagas Delaney to produce a campaign that draws attention to the impact of Britain’s chronic shortage of affordable homes.

The multi-media campaign started in June 2013 and runs for at least two years, consisting of multiple sub-campaigns, targeting parents whose children are going to be hugely affected by the current housing shortage.

Following the first burst of activity, which featured three beautifully-shot children’s playhouses and asked the provocative question whether these are the only houses your children will ever own, the campaign has moved on to focus on the plight of The Bank of Mum & Dad.

The Bank of Mum & Dad has traditionally been a key source of funding for first-time buyers, last year contributing £2 billion to help children with housing costs.  Britain’s enormous shortfall of affordable homes means rental costs and deposits for mortgages will become ludicrously high meaning the ‘Bank’ will no longer have sufficient funds to contribute.

In collaboration with director Mark Denton, Leagas Delaney has released a film that highlights the inability of the Bank of Mum & Dad to continue to support the cost of their children’s ever-increasing deposits and rents.

The film will be seeded on all major online news channel sites and through other digital formats.