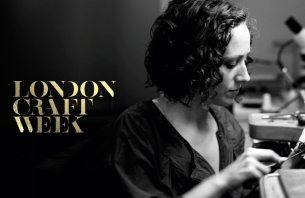 The Partners, the award-winning brand consultancy, have launched a new brand for London Craft Week. A new annual event, organised with the support of the British luxury society Walpole and event’s sponsor Vacheron Constantin, will be held in London for the first time 6-10th May 2015, and will introduce British and international craftsmanship to a wider audience.

The brand was created following a six-month project aimed at showcasing the creativity, skills and unrivalled techniques behind the beautifully crafted masterpieces, to inspire collectors and customers from around the world. The Frieze art fair, held annually in London, was an important benchmark for the founders who hope that London Craft Week can play a similar role for the world of craft. A brand that engages craftsmen and connoisseurs alike, as well as the wider public.

The Partners focused the brand on the personality of the maker, a true artist that creates exquisite masterpieces with passion, dedication and pride, with each piece relentlessly refined to achieve its purest ultimate form. Accompanied by the pared back typography, a bespoke pattern and black and white photography that echo the nostalgic flair of the past, the brand has a subtle presence, elevating pieces of craft and the true character of its maker.

London Craft Week will launch with over 50 exhibitions, masterclasses and events taking place all over London, with live demonstrations, talks and workshops hosted by recognised and lesser known artists’ studios, galleries and luxury brands. Greg Quinton, Executive Creative Director, The Partners, said “We are honoured to be involved in such an exciting, and very much needed, initiative that gives exceptionally talented British and international makers, and true artists of craft, the global recognition they deserve.’’