The Open-Source CPR Manikin that Could Save Women's Lives

Behind the Work 342 Add to collection

Women are 27% less likely to receive CPR – so JOAN has created the WoManikin to normalise female bodies, writes Laura Swinton 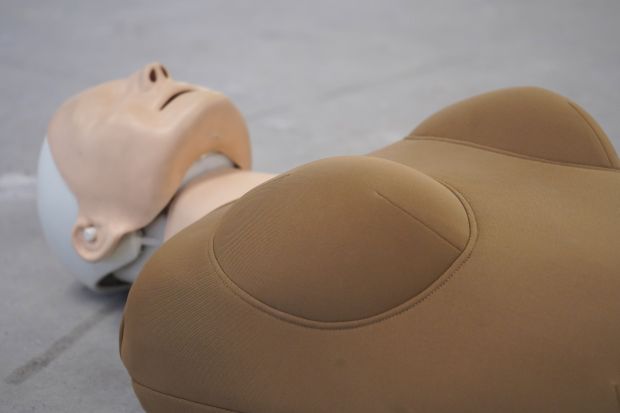 For those who think we’ve achieved gender equality, consider this. Today, in 2019, a woman in 2019 suffering from a cardiac arrest in public is 27% likely to receive CPR. Why? People just are not trained to perform CPR on bodies with breasts – they don’t know where to put their hands. The training manikin has always been based on the male body.
That’s why creative and innovation agency JOAN has designed a Womanikin, a product that can easily adapt the standard CPR dummy to resemble a female form – meaning that first aiders will be able to practise with and normalise women’s bodies. The design in open-sourced and free to download by organisations and individuals in a bid to make the WoManikin as accessible as possible.
It’s a crucial step. Last year the British Heart Foundation found that 8,000 UK women die due to unequal heart attack care, and the public is less familiar with cardiac arrest symptoms in female sufferers (aches in the arms, neck, jaw and stomach or the feeling of indigestion, rather than the classic ‘male’ chest pains seen in hospital dramas). Normalising the fact that women suffer heart attacks too and making the public less likely to hesitate when giving emergency care to women could help to boost the odds of survival for female victims. 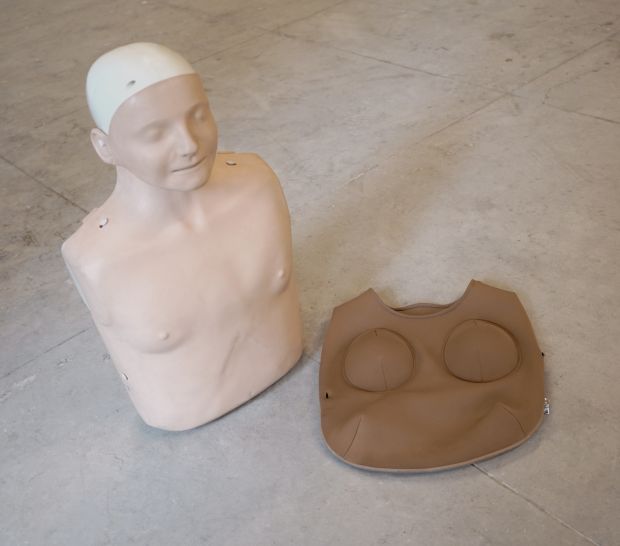 “Since survival from cardiac arrest depends on the prompt delivery of CPR by a bystander, we need to think of ways to make CPR training more accessible to everyone and for everyone. We also need to consider ways to raise awareness around sudden cardiac arrest, address these known gender disparities, and empower more people to perform CPR if needed,” says Dr. by Audrey L Blewer, epidemiologist and resuscitation scientist at the Duke University School of Medicine Department of Family Medicine and Community Health.
It was Dr Blewer’s study in Circulation: Cardiovascular Quality and Outcomes that revealed the 27% statistic and inspired the team at JOAN to devise the WoManikin. "We were equal parts pissed off and inspired by this statistic, and felt it was one that we could solve creatively," says the JOAN team. "Of course, this is a complex issue with multiple reasons behind it, but we thought a simple first step would be to start normalizing performing CPR on bodies with breasts, and the WoManikin just does that.  By helping change the misconceptions that people have towards touching a woman’s body in an emergency, we can help them to react faster and not hesitate, which is critical in a cardiac arrest situation."
“At the core of JOAN’s ethos is a deep-rooted commitment to gender equality. When we read about Dr. Blewer’s study and this long-standing problem in the world of CPR, we saw a relatively simple way to help change things,” said JOAN Co-Founder and Chief Creative Officer Jaime Robinson. “CPR manikins are designed to look like human bodies, but they actually represent less than half of our society. The absence of women’s bodies in CPR training results in hesitation from bystanders, which in turn results in women being more likely to die in cardiac arrest. Our hope is that the WoManikin will bridge this gap in education and, ultimately, save many lives.”
A key element of the WoManikin is that the design is open-source, making it as accessible as possible. Rather than manufacture a whole new manikin, training organisations can simply adapt existing dummies.
"Originally, we explored the idea of re-creating a full manikin with breasts  but after talking more with various CPR experts we realized the high cost of a manikin made buying a second one cost-prohibitive for independent instructors and local schools. This was one of those times were you have to go back to the drawing board, but the challenging limitations helped you find an even better solution that you had not imagined at first," explains the team at JOAN. "The Womanikin instead became a universal attachment with breasts, made out of easily attainable fabrication materials (neoprene fabric and silicone breasts) that can be applied on to any commonly used CPR manikin. This way, we re-design every existing CPR manikin without asking instructors to carry two different dolls. It was also very important to us to make it open source and release the design patterns for free on the website for any organization to download it and use it in classes right away."
That CPR dummies reflect only male bodies – assuming men as ‘the norm’ and essentially erasing half the planet – is just one example of gender-exclusive design bias. Earlier in the year, activist Caroline Criado Perez published ‘Invisible Women’, a book detailing the ways in which research and design across multiple fields routinely fail women by treating men as ‘the norm’. Google’s speech-recognition software is trained on male voices and is 70% more likely to understand men. Just recently it was revealed that drugs research almost exclusively uses male mice, resulting in drugs that can be sub-optimal for women. Women are more likely to be injured or killed in car collisions because most cars are designed only using crash test dummies based on male proportions, musculature and weight distributions. Volvo, which has been using female crash test dummies since the 90s, released 40 years’ worth of research data for other manufacturers to use.
"There are millions of ways women are treated differently, the more we dig in, the more we find the world has not taken women into consideration. This particular cause, resulted in women dying on the streets with nobody rushing in to help them," says the team at JOAN. "The WoManikin won’t solve everything, but we hope it’s a step in the right direction."
In order to spread the word about WoManikin, the team at JOAN has also created a sharply-design creative campaign that will play out online and via social media. They have also partnered with gender gender equality advocacy organisation, the United State of Women, to launch a new digital and social campaign. The campaign, which kicks off for National CPR Awareness Week in the US, and will include a social media challenge through Instagram stories where women share short videos explaining why women often don’t receive CPR. Women will encourage their followers to demand CPR using #GiveMeCPR.
"The United State of Women is thrilled to partner with JOAN on this important campaign to increase access to CPR for all women and girls. We believe the WoManikin is a crucial step towards training all healthcare professionals to perform life-saving care on all people, and to ensure that we move closer to healthcare equity in this country,” says Jordan Brooks, Managing Director and COO of United State of Women.
CREDITS
CCO : Jaime Robinson
CEO: Lisa Clunie
Head of Accounts: Sarah Collinson
Executive Creative Director: Dan Lucey
Associate Creative Director: Mica Gallino
Creative: Elana Sasson
Sr. Designer: Gonzalo Hergueta
Designer : Scott Sanders
Sr. Strategist: Dayna Uyeda
Strategist : Hannah Lewman
Executive Producer : Laura Lepre
Jr. Producer: Brenton Roberson
Music artist: Spaniol; Track: Prahh Com Poesia
view more - Behind the Work