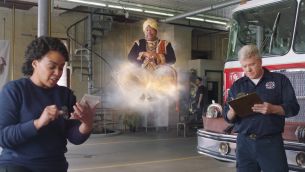 The Illinois Lottery is promoting its newest offering – instant tickets that can multiply a winner’s prize by as much as 100 – through an integrated campaign from OKRP. The agency was brought on as agency of record by the Illinois Lottery’s new private manager, Camelot Illinois, earlier this year to help increase sales.

The new statewide campaign – titled #MultipleWishes – kicked off at the end of August and featured a grumpy genie, @3WishGrant, played by comedian Leslie David Baker, who starred as curmudgeonly paper salesman Stanley in The Office.

The campaign began with a teasing introduction of @3WishGrant through social media, billboard and digital channels and included snarky comments such as “You can’t wish for #MultipleWishes.”

The drive behind the mysterious pronouncements was finally revealed when the Illinois Lottery launched the full campaign today, likening the Multiplier Instant Tickets to “wishing for multiple wishes” given the tickets are packed with multiple chances to win; to which the genie trolls the Lottery communications, reminding players that “You can't wish for #MultipleWishes.”

“The Multiplier Instant Tickets were some of the most popular and best performing Illinois Lottery games last year,” said Harold Mays, Interim Acting Director of the Illinois Lottery. “This campaign will provide an opportunity to creatively reintroduce them for the purpose of attracting new players to the game.”

“As we worked against all the opportunities that the Multiplier ticket can offer, we came up with the idea that being able to actually multiply your winnings was like asking for more wishes. That’s where it started,” explained Matt Reinhard, Chief Creative Officer at OKRP. “Casting a brilliant comedic actor like Leslie David Baker took the humor to a whole new level and helped tell our Multiplier story with a touch more personality.”

The television, radio, print and in-store advertising that follows the campaign launch provides more specifics on the Multiplier Instant Tickets. The new tickets offer a chance to win up to $2,000,000 by multiplying a prize up to 100.

Out of home, digital and social ads will feature the headline “It’s like wishing for multiple wishes.” In some interactive displays and in social, the genie will respond, rising from the smoke, declaring, “Except everyone knows you can’t do that.”

The television and digital video ads also have the genie popping into the scenes engaging with the announcer and prize winners with his standard, “You can’t wish for #MultipleWishes” rebuttal. You can see the ads here: https://vimeo.com/album/5393012