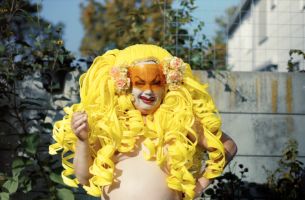 Hercules & Love Affair's Andy Butler explains: “So after six years of us never appearing in a Hercules & Love Affair video (more by accident than design), I wanted us to appear in the video for 'Rejoice'. Rouge Mary is such a ferocious performer so it was kind of a no-brainer. We had to capture that energy in this video. As a foil to Rouge’s performance, director Will Kennedy wanted to capture some of the club community around us, some that embody the essence of the message of the song. Will has a great mixed media style and a documentary angle in his work. Rouge and I felt that two boundary-pushing drag performers, who we love so much, Cybersissy and BaybJane would fit the bill perfectly. They have triumphed in the face of much adversity in their lives, and channel that triumphant and joyful spirit into brilliant otherworldly characters that they bring into the nightclub. I am so happy with what Will has captured and put together. It is bursting with colour and conveys Cybersissy and BaybeJane’s boundless creativity and beautiful spirits.”

“It was a rare privilege to work on this video with such talented, boundary-pushing artists," states director William Kennedy. “Andy and Rouge delivered standout performances, both fierce and tender, that truly captured the spirit of the song. To compliment the performance footage, Andy and I ventured to Holland and Germany with Cybersissy and BaybJane – two of the most wonderful and inspiring individuals I’ve ever had the pleasure to meet. Their creativity and their lust for life was infectious. They embodied everything we set out to convey with this video. It was a joy to work on.”