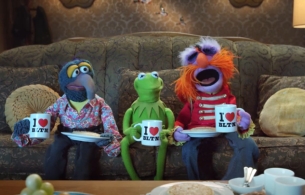 Warburtons has invested in another blockbuster ad to bring excitement to the bakery category and drive sales, this time starring everyone’s favourite gang - the Muppets, who will appear tonight for the first time in ‘The Giant Crumpet Show’.

The 120-second commercial of gigantic proportions is part of a large £25m integrated, through the line approach, which toasts the launch of Warburtons’ first-to-market Giant Crumpets range.

Premiering at 8.30pm in a special one-off slot during The X Factor Final, the ad took over ITV’s Saturday night gold spot, before rolling out across other popular channels at 9.30pm.

The ad begins with Kermit the Frog barging his way into Jonathan Warburton’s office with an idea to celebrate the launch of the brand’s new Giant Crumpets. The ‘Giant Crumpet Show’ stars all the Muppets’ best loved characters, including Kermit the Frog, The Swedish Chef, Fozzie Bear, Statler and Waldorf, Sweetums and of course the unstoppable Miss Piggy.

Hot out of the oven following Warburtons campaign, The Deliverers, which aired earlier this year and represented a significant change in advertising within bakery, starred Sylvester Stallone. The latest crumpet crazy campaign will be the second high profile talent partnership for the family baker this year, reflecting their confidence and future focus in the category.

Jonathan Warburton, Chairman of Warburtons said: “Since our standard crumpets first landed on shelves, they have been a firm favourite with families and are now a number one selling product across the UK.  We knew the only way to make them better was to make them bigger, and what better way to rise to the challenge than with a Warburtons Giant Crumpets spectacular featuring the larger than life Muppets!”

Commenting on The Giant Crumpet Show, Kermit the Frog said: “It’s the thickest and fluffiest production we’ve ever done.  We held nothing back, and I’m proud to say no Giant Crumpets were harmed during the making of this advert.”

The Giant Crumpet extravaganza was directed by Muppet regular Kirk R. Thatcher and Declan Lowney of Another Film Company. Art Direction and Copywriting was led by WCRS Creatives, Andy Lee and Jonny Porthouse.

Billy Faithfull, Executive Creative Director at WCRS, said: “Something magical happens when you hear the opening bars of the classic The Muppet Show Theme Song or hear Kermit's voice. They evoke a kind of nostalgic, homely delight in the cockles unlike anything else. Except, perhaps, the smell and taste of hot buttered Warburtons Giant Crumpets. If it doesn't draw a smile, you might want to see a doctor of some sort.”