The Mountains are Calling and I Must Go

Ruth Simmons, CEO of Soundlounge, heads to the TED summit in Banff Canada 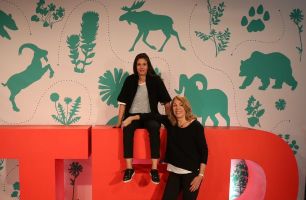 TED has been my guilty secret for many years. I regularly get up early on a Sunday morning and just as someone who binges on a box set or a Netflix series, I sit in the kitchen and watch about 6-8 talks. Absolute magic. So when my daughter Rachel invited me to attend the TED summit in Banff Canada, where she was speaking, I jumped at the chance. It was probably one of the most exhilarating experiences of my life.

For anyone who hasn’t heard of TED, check out www.TED.com and anyone who has thought about going and hesitated, I would say to them just go. Imagine being surrounded for a whole week by people who care about life and have intelligent and inspired perspectives on how to explore new ideas and challenge existing ways of thinking.

There were presentations from over 50 speakers, 88 workshop activities and outdoor pursuits ranging from rapid floats down the rivers, climbing the mountain peaks and trail walking through the forests, carefully keeping an eye out for the wild life that exists there.

Where else would I have had the opportunity to talk and ask Ben Saunders, the first man in 100 years to walk across Antarctica and back and survive, what it felt like to see nothing but white for over 3 months? (It would appear that a great music playlist will do a lot to keep you sane.) I had the privilege of conversing with Pico Iyer, a writer who keeps company with the Dalai Lama and who spoke with such elegance about finding stillness and focus in a mad world. I discovered that the trees in forests actually do communicate with each others – they really do, and heard the views of Alexander Betts on Brexit.

And I joined a drum circle…..

Apart from being a very proud mother, when Rachel spoke about the “Power of Collaboration and Building Trust”, I was struck by how timely her subject matter proved to be right now. And it was then, that I appreciated that the real strength of TED is to choose speakers and subjects that are right on the pulse of the zeitgeist which make them ideas worth sharing.