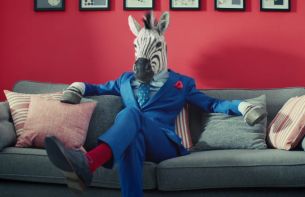 The Mill worked with Dom & Nic, WCRS and Outsider on B&Q’s new ‘Let’s Create’ campaign. Encouraging DIY fans to think like the star of the ad, an anthropomorphic zebra, and get more creative in the home; the 30 second spot introduces viewers to Fred who begins by telling us that his parents “aren’t fans of colour” and that they “live their lives in black and white.” Fred, on the other hand, quite clearly thinks in colour and we see him using B&Q’s colour matching service to help him create his new colourful home.

VFX Supervisor Mike Chapman comments, “We had a lot of fun with this spot creating a whole family of augmented photo-real zebras full of human personalities. To ensure the believability and characterisation, we worked from the live action references of real performers delivering their lines on set wearing prosthetic model heads, created by Millennium FX. Seeing how Dom & Nic directed each character on set further helped define each zebra’s personality, which our team of animators then brought to life as CG head replacements.”

The Mill’s ECD Neil Davies comments, “It was a real pleasure to work with WCRS and was another creative opportunity to once again collaborate with Dom & Nic. I am incredibly proud of the amazing team on this project; they not only turned it around in very little time, but created an utterly photo-real family of zebras, full of subtle animation charm.”