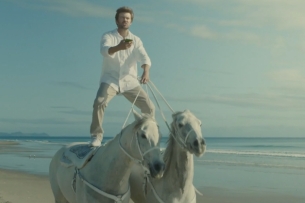 In the TVC, a man named Eric gets a quote from Bingle on his smart phone while singing the iconic 90’s classic song “The Horses” and Roman-riding two horses along a pristine beach. The message is, “With quotes in under two minutes, get your insurance and go.”

Prior TVCs have featured a chimpanzee skydiving, a magician’s assistant being sawn in two, and a jazz flautist making his crab dance to get a quote. To date the campaign has been a huge success for the brand.

The Monkeys Co-founder and Creative Director Justin Drape said: “In the first year, we’ve helped Bingle bring its unique personality to life, and “Horses” is another example of that. We’re hoping it extends Bingle’s appeal to a broader audience and people enjoy, what is in essence, a demonstration ad.”

Bingle Marketing Manager Jasmine Hildebrand said: “People are responding to the message that Bingle makes it simple to get your car insurance and get on with your life, with sales increasing dramatically year on year. We fully expect this spot to help us build on that success.”

This spot was directed by Rabbit Content’s Jeff Low, who was recently nominated for Director of the Year at the Shots Awards. “Despite how it looks, it really isn’t ‘as simple as it sounds’ to get a guy to straddle two horses and sing. It’s actually really hard. But what interested me was that challenge. It’s something you don’t see very often on TV, that’s for sure.”

Bingle’s new integrated campaign includes activations, press, digital and out-of-home, each demonstrating the simplicity of getting a quote and saving money with Bingle. New spots are scheduled to follow later in the year.