The Monkeys Launches Controversial Film 'Down Under' with Provocative Campaign 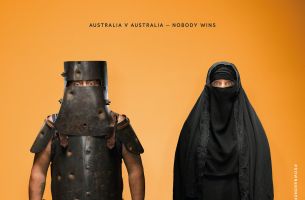 Getting behind Australia’s most controversial film of the year, The Monkeys has released a stirring campaign to promote Australian writer-director Abe Forsythe’s feature-length black comedy Down Under, in cinemas this August.

Premiering globally at this year’s Sydney Film Festival, Down Under is inspired by the Cronulla Riots of 2005 and is set during the aftermath of the unrest. Headed up by an all-star Australian cast, the film follows the fictional story of two carloads of hotheads from both sides of the fight, destined to collide.

The Monkeys’ provocative poster campaign is set to run nationally across outdoor, in-cinema and on social, in the lead up to Down Under’s cinematic release.

According to director Abe Forsythe, the challenge with Down Under, from script through to the final edit, was conveying the correct tone. It was vital that the controversial subject matter was not treated lightly.

“The whole team at The Monkeys embraced this challenge and came up with a brilliant execution,” Forsythe said. “It walks that difficult line, but does it with a sense of provocation and humour that makes us look at the issue in a different way. Just like the movie itself. I can genuinely say that working with everyone at the agency was one of the creative highlights of the six-year process it took me to make this movie.”

Says The Monkeys Chief Creative Officer and Writer Justin Drape: “We hope the film and the campaign will highlight some serious issues we still face in Australia, and the world, today. Everybody should see this film. Abe has somehow made the futility of hatred and ignorance funny despite the long term negative effects that this behaviour is having in our country.”

Down Under will release in cinemas on August 11th 2016, distributed by STUDIOCANAL Australia. A (sold-out) special preview screening of the film along with a Director’s Q&A was held last night at The Ritz Cinema in Randwick, Sydney.