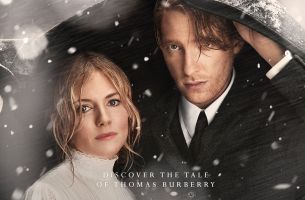 The Mill has announced that it will continue its collaboration with Burberry on this year’s festive film, which celebrates the brand’s 160th anniversary through the re-enactment of poignant moments which have helped shape, not only the brand’s history and values, but the history of the twentieth century as a whole.

Written by Matt Charman and directed by Asif Kapadia, ‘The Tale of Thomas Burberry’ comprises a three-minute cinematic trailer featuring an all-star cast including Domhnall Gleeson, Sienna Miller, Dominic West and Lily James who help to bring moments of ground-breaking innovation to life. From the development of the weatherproof fabric, gabardine and the military trench coat, to the outfitting of polar explorers and pilots, each tale nods to the pioneering achievements of Thomas Burberry.

Shot primarily at Shirburn Castle in Oxfordshire, the location served as the backdrop for the faithfully recreated First World War trenches, and Thomas’ workshop inspired by materials in the Burberry Archive. Replica gabardine tents, made at Burberry’s Castleford factory in Yorkshire, were created for the exploration scenes.

Mill Senior Producer Colin Oaten states, "It was a delight to work with Asif and help bring his vision to fruition with such a visually stunning piece of film-making. We’re very proud be continuing our collaboration with such an iconic British brand."