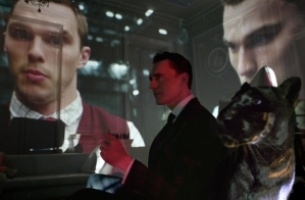 Continuing their collaboration with Spark 44, The Mill and Academy Award winning director Tom Hooper worked to bring the latest instalment of Jaguar’s ‘It’s Good To Be Bad’ campaign to life to advertise the new XE model.

The spot features renowned Hollywood bad guy Tom Hiddleston, who is seen feeding the last remains of predecessor Sir Ben Kingsley to a live jaguar. The ad also stars fellow Brit Nicholas Hoult who’s character mirrors that of Bond’s Q. The Mill’s VFX team added a host of effects in 3D and motion graphics to create a seamless transformation between the F-Type and XE car models. Lead 3D artist Mike Chapman comments, “We really wanted to build on the visual language of ‘The Lab' in this spot, but at the same time accentuate the shared design features between the two cars.  We went through a number of different iterations before settling on the final look for this and also integrated an interactive UI for Nicolas Hoult to play with.

There was only one XE model on set when filming, so we had a number of stand in cars which were made up of F-Types, XJ's and XF's. These all needed to be replace with the XE, in some shots this totalled 8 cars that needed replicating and replacing by our VFX team.”