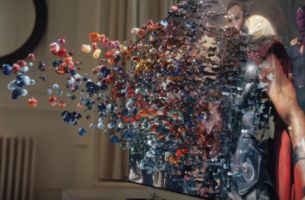 Sky will break new ground with a visually spectacular advertising campaign for the launch of Sky Q, the next generation home entertainment system.  The campaign is the biggest and most ambitious in Sky’s 27 year history and will roll out in the UK and Ireland from 12 February 2016.

An arresting campaign, produced by creative agency Brothers & Sisters, will make use of futuristic 60-second spots.  The ads illustrate how the family of advanced Sky Q products connect wirelessly to create an ecosystem that makes TV viewing seamless - known as Fluid Viewing.   The result sees dramatic content like Marvel’s Avengers: Age of Ultron exploding from one screen and embarking on an epic journey around the home in the form of droplets, before vividly splashing and reforming onto the next screen.  The ads play out to the soulful, live soundtrack of “I’ve Gotta Be Me” by Sammy Davis Jr.

The ads, beautifully shot by award-winning director Johnny Green, involved a Mill team of 52 VFX artists who pushed the boundaries of liquid simulation technology over twelve months, crafting a series of bespoke liquid droplets that are seen exploding out of the screen. Each liquid pixel was fully crafted in CG to create something truly beautiful and memorable, using a range of techniques created specifically for this project; bringing to life over 4000 individual simulations all full of individual personality and pace.

In order to create water droplets with real depth and consistency, the team created their own fluid system allowing them to dial in dynamism and life to the liquids. Each droplet was made from an inner and outer shell. The inner membrane contained the imagery from the original TV screen, whilst the outer acted as a magnifying lens to distort and exaggerate the vivid colours within each frame and provide a reflective surface for the filmed environment.

Francois Roisin, Lead 3D Artist and Joint Creative Director on Sky Q comments, “Working on Sky was a real opportunity to push The Mill’s fluid simulation to the next level. We had to carefully direct, tame and animate each drop of liquid in order to bring the textured fluid to life, as well as develop a number of techniques in-house to apply the screen-like texture onto these fluids and craft a beautiful colour palette for the spot. The CG liquid is the hero of this commercial, and crafting a journey with such a volatile element as fluids, whilst also retaining a natural motion, was a real tour de force.”

Dan Williams, Creative Director at The Mill and Lead 2D Artist commented, “None of us had seen liquid behave or look like this before and required a giant leap of faith for all involved, including Johnny, Brothers and Sisters, The Mill and Sky. It was the kind of brief that we thrive on as it produces the most rewarding and innovative results. What we've done with these droplets is take something incredibly complex to create and choreograph, and imbued it with simplicity, elegance and meaning. There's drama and beauty in every little corner of this film.”

The campaign will be delivered across multiple media channels including TV, radio, cinema and print, as well as detailed use of digital and social channels. The digital execution includes a number of firsts for both Sky and the industry in terms of its innovative use of ad sequencing including digital outdoor, new formats such as Twitter Moments and Facebook Canvas Ads, as well as pioneering display techniques which maximise the impact of the creative on mobile and tablet devices.

Stephen van Rooyen, Chief Marketing, Sales & Digital Officer, Sky, commented: “For our biggest and most innovative technology launch, we wanted our biggest and most innovative ad campaign ever.  On screen we have delivered something that is a truly world class in terms of creative and production.   As the content explodes from screens, viewers will believe it has actually liquefied and the drops contain real pieces of a movie or TV show. The fluid ethos of Sky Q will be carried over into how we deliver the campaign across multiple traditional, digital and social media platforms”.
Andy Fowler, Executive Creative Director, Brothers and Sisters, added: “As always Sky wanted to push the limits of creativity. Getting to something truly original has required mind-boggling skill and effort. The whole thing took one year including five months of intensive pre-production prior to any filming.  In total the ads involved 52 artists, 105 liquid VFX shots, over 4,000 individual simulations and an incredible 45,000 hours of rendering to get the ads just perfect.”

The total media campaign - Sky’s biggest ever - has been developed in partnership with media agency, MediaCom.  On TV during the launch phase, highlights include a network kick off in Mr Selfridge followed by a presence in England vs. Italy 6 Nations match on ITV, as well as airing during the first episode of Martin Scorsese and Mick Jagger’s new series Vinyl on Sky Atlantic.   The digital campaign includes a number of firsts for both the industry and Sky, with highlights including:

Detailed use of sequencing:  All digital activity is planned in a way to ensure the messages of the campaign are joined up sequentially to form a fluid story. Customers will first be introduced to the product and the concept of Fluid Viewing and then learn over time about specific features across display, mobile and tablet, VOD and social formats.  Examples include website banners talking to one another and appear as such that the Fluid Viewing droplets cross between the banners on the same webpage, and for the first time users of the All4 On Demand platform will see ads in specific sequences telling the story of Sky Q.

Innovative use of Outdoor: As well as using TV, digital and social, Sky will be one of the first brands to run a sequential targeted campaign across digital outdoor screens in London. Location data is layered with audience mapping data to deliver the creative through an automated system according to the location, time of day and the route people are travelling, mirroring Sky Q’s Fluid Viewing service. The system will choose the best ad to appear at outdoor locations such as London Waterloo station based on which ads people may have already seen on their journey in.

New Social Media formats: This will be the first campaign where Sky uses Facebook Canvas Ads, the Twitter Moments functionality and also Twitter Scratch Reel ads. The Facebook Canvas ad is an immersive, full screen take-over on the Facebook mobile platform, allowing the user to experience and explore the benefits of Sky Q in a highly engaging way. This is a brand new innovative social format, with Sky one of the first advertisers to run it. Twitter Moments gives users the best of what is happening on Twitter at that moment in time. The campaign will natively deliver Sky Q messages within Twitter Moments, showcasing its functionalities in a natural and unforced way.  Twitter Scratch Reel ads are revealed to the audience once they scratch away at the image on screen, driving intrigue into the new product. Sky has worked extensively with Twitter to identify customers who use the platform to better tailor messages to them.

Pioneering display techniques:  Fluid Viewing helps change the way TV is presented. In that spirit, the Sky Q ad campaign will make innovative use of new display tools.  This is the first industry use of Gyroscope functionality, meaning that when a tablet or mobile is moved, it will impact how the Fluid viewing droplets in the ad appear on the screen. It will look as if they’re following the angles of which the device is facing.  Another tool being utilised is the brand new Celtra formats, meaning the ad swells initially when it appears on mobile and tablet screens to maximise cut through and ensure standout.

Online Brand Experience: Fluid Viewing has been brought to life in both a digital and physical space. An immersive website has been created so customers can experience Fluid Viewing for themselves at www.sky.com/skyq