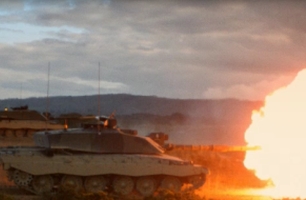 Cherry Studios' Jake Nava continues his collaboration with JWT for the latest installment in their gripping 'More Than Meets The Eye' campaign for the British Army. This powerful ad combines slow motion and and intense music along with a host of visual effects added by The Mill.

The 90 second spot is designed to attract new Army recruits, by showcasing the wide range of roles and opportunities available in the Army now.

The Mill's VFX team worked to add in a a series of matte paintings and background replacements, integrating key elements to change the location of the action packed scenes. Creative director Dan Williams comments, "It was a real pleasure to work with Jake and the JWT team again on this exciting Army commercial. Our main task was to enhance the environments, turning England's Chesil beach into the Malaysian coast and elements shot in Crete into a Thai waterfall. We also added camera moves focussing on the gun recoils, which added a sense of drama to the ad."

The AFX team then added in captions, giving the text a natural movement influenced by the action on screen.