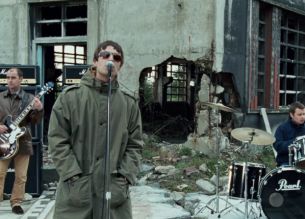 To celebrate the 20 year anniversary of the release of Oasis’ 1997 album 'Be Here Now’, the band have gone back into the studio to re-master and re-release the album.

In conjunction with the re-release, Directors Dom&Nic who originally shot the promo ‘D'You know what I mean?' in 1997, approached The Mill to re-master the video in 2k resolution.

Mill Creative Director, Neil Davies comments; “It’s hard to believe that it’s nearly 20 years since this track, along with Dom&Nic’s iconic video first came out. Dom&Nic approached us to do a re-mastered version for them and it was great fun being able to go back to the 35mm film and re-master the promo using today’s technology. It’s amazing how modern it looks in high resolution, with remade comps and a new grade. Even the combat gear doesn’t seem to have dated! This is the first promo re-master I’m aware of and hopefully it will start a new trend of bringing classic promos up to date.”

2D Lead Artist George Rockliffe says; "When originally released in 1997, the promo was distributed in PAL, the old standard definition format, and so we wanted to go back to the original 35mm film to rescan the stock footage and get the 2k material from the source. The analogue medium had all of this information in it that was never seen in the original distribution.

Once we had the newly scanned footage, we matched the promo shot for shot, in line with Noel Gallagher's 2016 remix of the track. There were two big composite shots to complete, which were done in Nuke and Flame as well as some restoration work where scratches or hair were compromising the new quality of the film.

All of this new work was completed at 2k resolution and combined with a new grade from The Mill’s Dave ‘Luddy’ Ludlam, both bring the music video right up to date. This is testament to the creative on the original shoot in conjunction with the additional post we completed here at the Mill."

Mill colourist Dave ‘Luddy’ Ludlam comments; “Originally shot at the Beckton Gas Works where Stanley Kubrick's ‘Full Metal Jacket' was filmed, I was very excited about both re-mastering 30000ft worth of 35mm film and working on such a classic track by Oasis.

After delving through footage to find all the shots and getting the promo conformed, my main focus was to get the very best out of the material so as not to in any way compromise the original footage and range that the 35mm had captured.

It’s been an amazing project to work on and I think that when you watch the finished piece you see how interesting and clean the material is and how well it has stood the test of time 20 years on.”