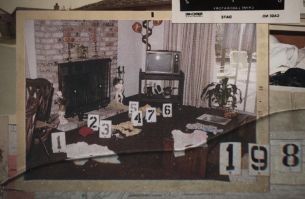 Over the course of five documentary-style episodes, Unmasking a Killer reignites the decades-long hunt for the infamous Golden State Killer, a man responsible for 51 attacks and 12 murders in California. By examining his terrifying crime patterns and mind games, the show offers new information and accounts in response to the FBI’s recent offering of a $50,000 reward in the case.

The designers at The Mill crafted the title sequence by fusing the timeline-driven aspect of the series with carefully executed effects. Art Director Hyejung Bae explains, “I wanted the titles to emulate the seriousness and darkness of the show without making it overly scary. We worked to depict the journey of the killer’s crimes using maps, timelines, news clippings and photos, tying it all together with an abstract glass element. We experimented with the shatter effect in CGI, but ultimately ended up shooting it practically to achieve the perfect tactile look.”

Biagio Messina, Executive Producer of the series, adds, “Unmasking a Killer was our passion project, and we wanted a graphics package that would elevate it. The Mill delivered on every level. They also helped us stretch our documentary budget by coming up with creative designs that could be reused in various ways. That gave the show a coherent feel, and allowed us to create additional last-minute elements. Both we and the network were very happy, and felt the graphics package supported the emotional nature of the show.”